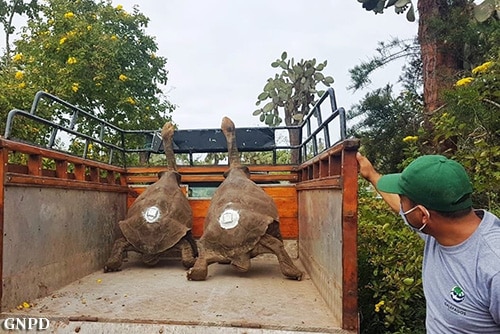 A Galapagos tortoise breeding program that launched at the end of John F. Kennedy’s presidency has ended, and all 15 of the Galapagos tortoises (Chelonidis hoodensis) in the program have been returned to Española Island where they were released back into the wild. The tortoises were initially on other islands in the chain.

The June 15 release ends what was one of the most successful captive breeding programs for this species, according to the Galapagos National Park Directorate and Galapagos Conservancy, which oversaw the breeding program and the release of these reptile ambassadors.

The Galapagos Conservancy wrote in a news release announcing the closure that the captive breeding program led to the reintroduction of close to 1,900 Española tortoises on the island. Many of the offspring have survived and now the conservancy estimates more than 2,300 of the giant tortoises are living on Española.

“This captive breeding program, in addition to the management actions implemented on Española island, give us peace of mind that we managed to save a species that would otherwise have become extinct. It can only be described as successful and an example of the conservation efforts that we implement as a National Government in synergy with our allies,” Paulo Proaño, Ecuador’s Minister of Environment and Water said.

Galapagos Tortoise Fathered 800 Offspring and Helps to Save His Species

The tortoises were put into an extensive quarantine. The release was originally slated for March 2020, but the COVID-19 pandemic delayed the transfer. The reptiles were internally and externally de-parasitized, and were microchipped and outfitted with GPS tracking devices.

“The first monitoring trip will take place in about six months,” Washington Tapia, director of the GTRI through Galapagos Conservancy said in the statement. “However, each tortoise has a GPS satellite device that will send six positions daily, which will add to images from 40 motion-triggered cameras distributed in the area. These will allow us to know all of their movements and activities.”

Of the three males in the breeding program, Diego was the second most prolific. Forty percent of the young tortoises living on the island were fathered by Diego, according to genetic testing, while E5, fathered 60 percent.

During the early 1960s, there were just two males and 12 female Chelonoidis hoodensis Galapagos tortoises left on the island. They appeared in dire straits as a species. So in 1976, Diego, who began life on Española, was sent back to be part of the captive breeding program on the island. That program was deemed successful in 2014. In his 40 years as part of the program, he has been very prolific in adding to the species.

Loading...
Newer Post
Let SnakeSnap Help You ID A Snake While Out Herping
Older Post
Building A Positive Relationship Between Your Tegu And Its Food
Advertisement