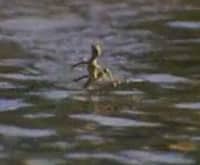 Why Some Lizards Can Pull A Wheelie

Why do some lizard species run on two legs, not four?

Why bother running on hind legs when the four you have work perfectly well? This is the question that puzzles Christofer Clemente. For birds and primates, there's a perfectly good answer: birds have converted their forelimbs into wings, and primates have better things to do with their hands. But why have some lizards gone bipedal? 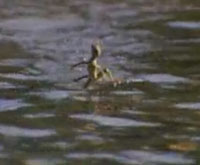 Running on two legs is a natural consequence of the lizards' acceleration. The basilisk is known for running on its hind legs. Here, one crosses a body of water.

Have they evolved to trot on two feet, or is their upright posture simply a fluke of physics? Curious to find the answer, Clemente and his colleagues Philip Withers, Graham Thompson and David Lloyd decided to test how dragon lizards run on two legs. But first Clemente had to catch his lizards!

Fortunately, Thompson was a lizard-tracking master. Driving all over the Australian outback, Clemente and Thompson eventually collected 16 dragon lizard species, ranging from frilled-neck lizards to the incredibly rare reddening sand dragon (C. rubens), found only on a remote Western Australian cattle station. Returning to their Perth laboratory, Clemente and Withers set the lizards running on a treadmill, filming the reptiles until they were all run-out.

Clemente admits that when he started, he thought that the lizards would fall into one of two groups: lizards that mostly ran on two legs, occasionally resorting to four, and lizards that never reared up. Not so. Even the lizards that he'd never seen on two legs in the wild managed an occasional few steps on their hind legs. In fact, the lizards' propensity for running on two legs seemed to be a continuum; the reddening sand dragon and bearded dragon spent only 5% of the time supporting themselves on their hind legs while Gilbert's dragon (L. gilberti) spent 95% in this posture.

Curious to know whether or not bipedalism has evolved, Clemente drew up the lizards' family tree and plotted the percentage of time each species spent on their rear legs, but there was no correlation. The reptiles had not evolved to move on two feet. Something else was driving them off their front legs – but what?

According to Clemente, other researchers had already suggested reasons for the lizards rearing up. It could be that running on two legs was faster or more economical than running on all four. But when Clemente analyzed the lizard running footage he realized that running on hind legs was more energetically costly, and the bipedal runners were no faster than the quadrupeds.

Knowing that Peter Aerts had suggested that lizards improved their maneuverability by moving their centre of mass back towards the hips, Clemente wondered whether the lizards' front legs were leaving the ground because of the position of their center of mass. In other words – could they be 'pulling a wheelie'?

Teaming up with David Lloyd and modeling the running lizards' movements as the lizards accelerated, they realized that there was a strong correlation between the lizards' acceleration and their front legs pulling off the ground. Clemente explains that by moving their center of mass, a turning force acts on the lizards' torso; lifting it off the ground and making them run upright.

So running on two legs is a natural consequence of the lizards' acceleration. Clemente also concluded that some dragon lizards have exploited the consequence and chosen to go bipedal because it gives them some advantage, but at present, the actual benefit of this temporary mode of locomotion remains a mystery.