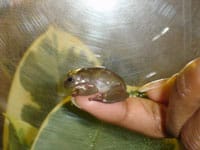 A new Scottish study has revealed that White’s tree frogs (Litoria caerulea) have specially-adapted, self-cleaning feet. This could have practical applications in the medical field, and bring benefits to industry too, being one of the latest examples of bio-mechanics to be discovered.

"Tree frog feet may provide a design template for self-cleaning, sticky surfaces, which could be useful for a wide range of products, especially in contaminating environments where dirt accumulates. This could have a diverse range of applications, covering areas such as medical bandages, tire performance, and even long-lasting adhesives," said researcher Niall Crawford from the University of Glasgow.

Self-cleansing
Tree frogs have sticky pads on their toes that they rely on to maintain a grip in difficult situations, but until now, it was unclear as to how they prevented these pads from picking up dirt when on the move.

"Interestingly, it is the same factors that allow tree frogs to cling on that also provide them with a self-cleaning service. In order to make their feet sticky, tree frogs secrete mucus. They can then increase their adhesion by moving their feet against the surface to create friction. We have now shown that the mucus combined with this movement also allows the frogs to clean their feet as they walk," Crawford said.

On The Move
The researchers placed the White's tree frogs on a rotatable platform and measured the angles at which the frog lost its grip. When the experiment was repeated with frogs whose feet were contaminated with dust, they initially lost grip but if they took a few steps, they then regained their adhesive ability, allowing them to hold on and climb up the surface effectively.

"When the frogs did not move so, their adhesive forces recovered much more slowly," said Crawford. "This shows that just taking a step enables these frogs to clean their feet and so restore their ability to anchor themselves to the surface which they are climbing."

The study has shown that White's tree frogs have tiny hexagonal patterns on their feet, which allow some parts of the pad to remain in contact with the surface and create friction, while the channels between these allow the mucus to spread throughout the pad. This mucus allows the frog to retain its grip and then when the amphibian moves, it also carries away any dirt. The Glasgow team believes that if this mechanism can be translated into a man-made design and replicated, it could give rise to a new, re-useable and effective type of adhesive.