Information for breeding the whipsnake, coachwhip and racer snake.

Before successfully breeding Masticophis or Coluber snakes, you should separately brumate only your healthy adult snakes at 58 to 62 degrees Fahrenheit from the end of November to about mid February. Remember that I’m referring to California individuals of these snake genera. You’ll need to adjust according to your local region. In Southern California, spring weather usually begins at the end of February. If you live elsewhere, try warming your snakes a couple weeks before the springlike weather begins in your area. Use dry bedding and continue to have a bowl of drinking water available. Although the brumating snakes remain motionless most of the time, there are times when they wake up and want to drink. 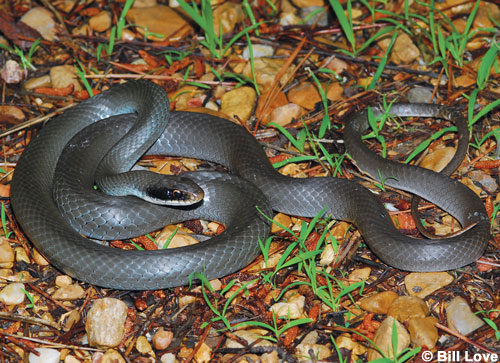 Around the middle of February (in Southern California), begin bringing up the temperatures to 78 to 82 for about a week. Then feed your snakes.

A week or two later, put the female snake in with the male snake. Do this while keeping the heat up to at least 85 degrees at one end of the enclosure. Remember to have a much lower temperature available at the other end. You may try keeping the two snakes together for a few days, separating them for a few days and then reintroducing them until copulation occurs.

Courtship of these snakes involves the male pursuing the female and placing his body along hers. He grasps her neck in his mouth. When she is ready for copulation, she raises her tail. The male everts and inserts one of his hemipenes into the female’s cloacal opening.

Before depositing eggs, the female snakes will be swollen, and the eggs will gradually move toward the cloacal region. Depending on the species and other specific factors, the female lays her eggs nearly two months after copulation and about five to 12 days after the prelay shed. All Masticophis and Coluber within California are egg layers (oviparous). Remove the water bowl to make sure the female doesn’t accidentally lay eggs in the water and destroy them.

Have a small plastic Tupperware- or Rubbermaid-type nest box partially filled with damp substrate, such as moist green moss, available in the enclosure. Cut a small, round hole in the top of the nest box for the female snake to enter. Continue to offer water, but take the bowl out each time after a few minutes.

When the eggs are deposited, mark the top of each egg with a felt tip pen to indicate the position they were laid in. Carefully place the eggs, with the dot marks up, into an incubation box filled with a substrate such as vermiculite or moss that has been previously soaked and thoroughly wrung out.

During snake egg incubation, maintain a humidity level of at least 80 percent with the temperature set at 78 to 83 degrees. Eggs hatch in seven to nine weeks. Depending on the snake species, young can be fed crickets, very young lizards or tiny pinkie mice.