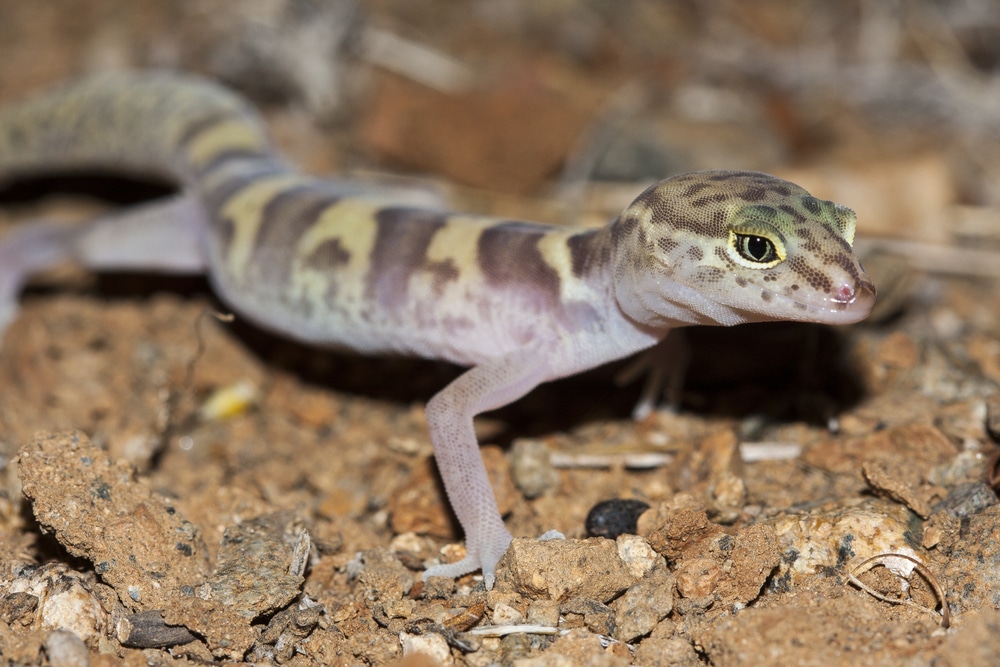 Southwestern United States and northern Mexico in the Sonoran and Mojave Deserts, as well as islands off the coast of Baja California, Mexico and in the Gulf of Mexico.

Because of their small size and tendency of sticking to the ground, they are easy to house. Start with a 10-gallon terrarium with a secure top. Bedding of an inch deep can consist of organic top soil, ground coconut core, coarse gravel, terrarium carpet or even Sani Chips. Under one end of the tank, place a heating pad, which should provide a hotspot of about 85 to 90 degrees Fahrenheit. If needed, add a heat lamp or heat emitter over this to help achieve this hotspot temperature. Make sure the heat lamp is one of the red- or black-light varieties, as banded geckos are most active in the dark. At the cool end, place a shallow water bowl large enough for the gecko to drink from. Place one hide at the cool end and one at the warm end of the enclosure. You can’t have too many hiding places for these guys. I place damp moss under some of the hides. These geckos enjoy the humidity, and it helps them to shed their skin. Dampen the moss once per week, and change it out about once a month. Here in Vegas, wild urban banded geckos are found mostly in sprinkler control boxes, and in and around underground water meter boxes. It’s damp there, and they love it. Banded geckos are nocturnal and can be found scampering across roads at night. They also scamper about their enclosure in captivity. Males don’t tend to like each other, so make sure you only have one male per tank. A 10-gallon terrarium can hold one male and up to five females. They breed readily, and the damp moss hides are a great place for them to lay their eggs. 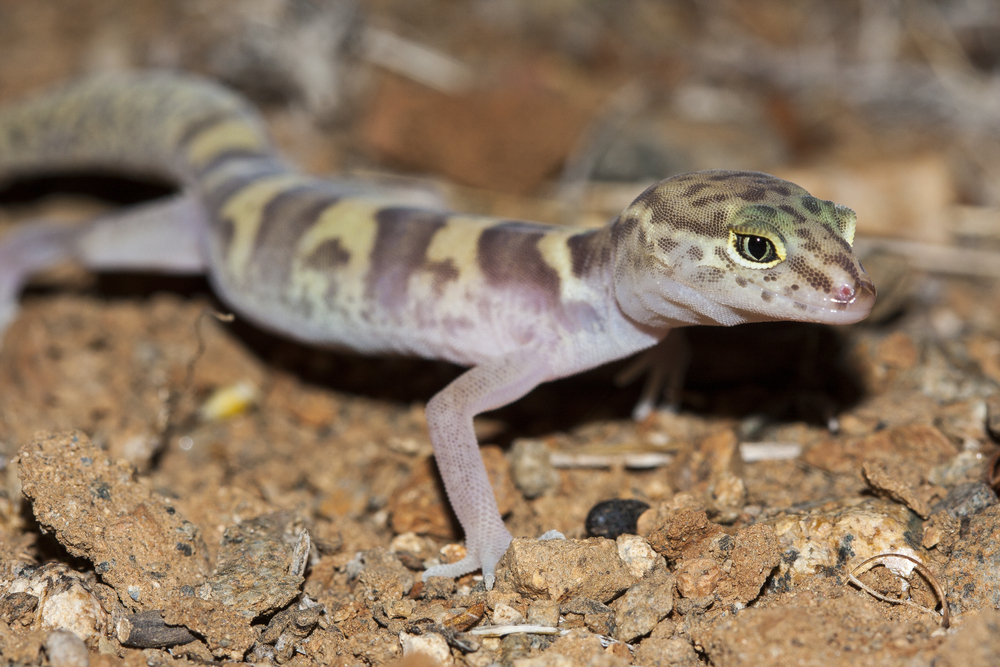 In the wild, banded geckos eat a large variety of insects and arachnids. In captivity, they do the same thing. Crickets, mealworms, waxworms, small roaches and other insects that are easy to obtain are readily accepted. Add a calcium supplement on prey items every other feeding. Feed them as much as they like about three times a week.

Banded geckos help keep down scorpion populations in urban areas by eating lots of baby scorpions. They also mimic scorpions by running with their tails arched over their backs, fooling potential predators into thinking they are dangerous to approach. They also sometimes squeak when they feel threatened.

Most areas where western banded geckos are found prohibit their collection and sale. However, geckos are still being collected for the pet trade in Nevada, and this is where most of the legally collected banded geckos come from. An interesting side note: because my store is located where they are native, I’m not allowed to sell them, even though they are commercially collected here. But they can be, and are, exported out of state to be sold in other areas. There is some captive breeding going on, and hopefully it will increase over time. These are as easy to breed as leopard geckos. The babies are just a lot smaller. I have not seen any morphs, but I would not doubt that they will pop up sooner or later as more are captive produced.

Ken Foose produced his first captive-bred snakes at age 11. With a Master’s Degree in Zoology, he has been both zookeeper and curator. He opened Exotic Pets, which specializes in reptiles and amphibians, in Las Vegas in 1991, and he is currently president of the International Herpetological Symposium.