Q. I have a natural vivarium with a substrate mixed according to Rex Lee Searcey’s “Flourish Over Failure” article in the 2009 Re

Q. I have a natural vivarium with a substrate mixed according to Rex Lee Searcey’s “Flourish Over Failure” article in the 2009 Reptiles USA. The tank is set at 85 degrees Fahrenheit on the hot side with a small tree boa (Candoia carinata) that I water every day. My problem is that I set up the tank four days ago, and I can already see something white (fungus?) growing between the glass and the substrate. How can I fix this and prevent it from happening in the future?
Tim James
Holton, Kan. 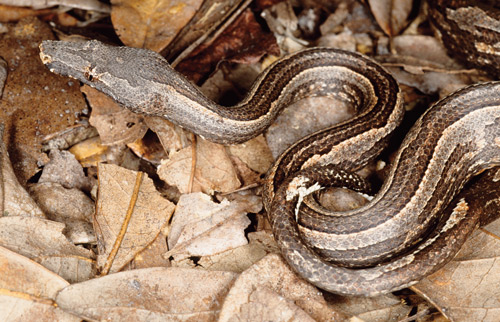 Too much moisture in a vivarium can cause fungus and mold problems. Animals like this small tree boa (<em>Candoia carinata</em>) may need a higher level of humidity, but a humidity level that is too high will hurt the snake&rsquo;s health.

A. This sounds like a simple and very surmountable problem — too much moisture. There’s too much held in the substrate, because you apparently are not allowing enough airflow through your vivarium to evaporate it. I see three options:

1. You can remove the substrate mix and let it dry. Spread it on a table where air is circulating until it feels barely moist to the touch. Then set the enclosure back up as before.

2. Stir up the existing substrate so it dries in place. This will take longer, of course. Repeat stirring the substrate often for faster results.

The first two strategies assume that you started with a mix that was too moisture-laden to begin with. A third possibility — a likelihood, really — is that your setup does not have enough airflow for the amount of water you’re introducing daily, creating a damp, stale environment for your boa. Look at how the cage is ventilated. If the only airflow occurs at the top, can you change or replace the panel for a more airy material? For example, swap a Plexiglas top with a few holes for one with plastic mesh across the majority of its surface.

Another approach is to mount a small fan inside the enclosure, so it blows fresh air in and forces old musty air out. Even the dense, dark rain forest has occasional air movement, so the environment doesn’t stagnate. You just have to replicate something similar to that natural habitat in your miniature ecosystem.