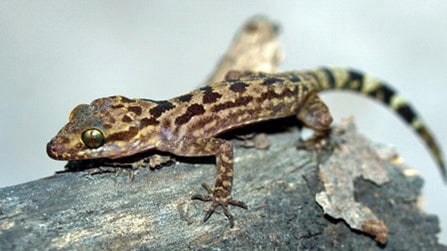 Researchers in Vietnam have discovered a new species of lizard in the mountains near Ho Chi Minh City, bringing the number of lizard species discovered in the Southeast Asian nation to 32. The lizard, Cyrtodactylus thuongae is 78 mm in length and features dark brown spots on its back and neck. It was named in honor of Dr. Nguyen Thi Lien Thuong, a lecturer with the Ho Chi Minh City University of Food Industry. She is a well known herpetologist in the country who has contributed greatly to the research and discovery of amphibious lizards, according to researcher Phung My Trung, one of the researchers who discovered the lizard.

Cyrtodactylus thuongae is 78 millimeters in length and features dark brown spots on its back and neck.

Trung and his fellow scientists spent three years looking for the lizard after they discovered a dead one east of the Ba Den mountain range. They first found a female in 2012 that was living in a stream in a cave at 600 meters altitude on the mountain. In June 2013, they found two males in similar habitat.

Colorful Lizard From The Family Agamidae Discovered In Vietnam

What is interesting to note about the location in which the lizards were found is the fact that two other species, Cyrtodactylus badenii and Cyrtodactylus nigrocularis also share the same habitat. Trung told Tuoi Tre News that the Ba Den mountains where the lizards were discovered are being devastated by deforestation, pollution from pilgrims and climbers, and hunters who sell lizards to restaurants.

Check out the video of a different Vietnamese gecko, the cave gecko.