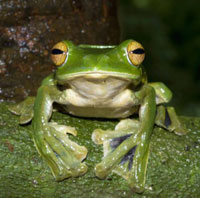 Rhacophorus helenae is about four inches in length and has webbed hands and feet to aid in gliding.

Dr. Jodi Rowley, an Australian Museum amphibian biologist and her Vietnamese colleagues, Dao Thi Anh Tran, Huy Duc Hoang & Duong Thi Thuy Le, discovered a flying frog less than 100 kilometers from Ho Chi Minh City, a metropolis with more than 9 million residents. The frog was discovered on a patch of lowland forest that sits in the middle of agricultural land. Rowley said that the frog has been found on only two such patches of forest, and noted that these types of environments are among the most threatened in the world.

“The new species is at great risk due to ongoing habitat loss and degradation – the greatest threat to amphibians throughout Southeast Asia – but hopefully it has been discovered just in time to help protect it, Rowley said in a press statement released by the Australian Museum.”

Rowley named the frog "Helen's Tree Frog" (Rhacophorus helenae), after her mother who is battling ovarian cancer. According to Rowley, her mother has supported her over the years as she traipsed through countries in Southeast Asia searching for frogs.

“My mother was recently diagnosed with ovarian cancer and I thought it was about time that I showed her how much I appreciate everything she’s done for me and everything that she’s put up with over the years,” Rowley said.

The frog is bright green with a white belly. It has webbed hands and feet that enable it to glide between trees and to the forest floor. It also has flaps of webbing on the outside of its arms, giving it one of the best gliding capabilities of frogs in the Rhacophorus genus. The frog is about 4 inches in length and Rowley speculates that it probably went undiscovered because it lives high in the forest canopy.

An abstract of the paper can be viewed at The Journal of Herpetology website.