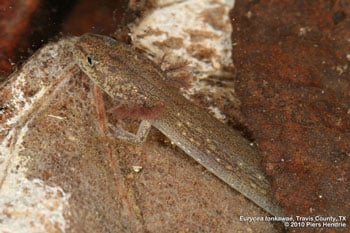 Despite efforts of a Texas congressman and other politicians to prevent their listing, the Austin blind salamander (Eurycea waterlooensis) and the

Despite efforts of a Texas congressman and other politicians to prevent their listing, the Austin blind salamander (Eurycea waterlooensis) and the Jollyville Plateau salamander (Eurycea tonkawae), two species native to the Lone Star state were awarded Endangered Species Act protections by the U.S. Fish and Wildlife Service, according to a Community Impact News report. The USFWS also designated 4,451 acres of land as critical habitat for the two species. Both species have been threatened by such issues as ground water overuse, urbanization, site contamination, and poor watershed management practices. 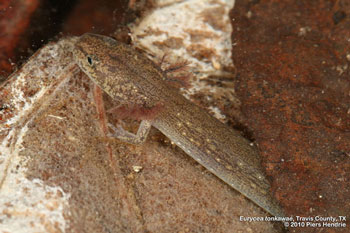 "We have carefully evaluated the public comments received on the salamander proposal, and our actions reflect the best available science,” Adam Zerrenner, USFWS Austin Field Office supervisor said in a statement. "The service is committed to continuing to work with the local communities, landowners and others to conserve the salamanders and the Edwards Aquifer. A healthy Edwards Aquifer is important for the continued vitality of the communities as well as the plant and animal species dependent upon it.”

The Georgetown (Eurycea naufragia) and Salado salamanders (Eurycea chisholmensis), which were also considered for protections under the Endangered Species Act, have had their final decision postponed by a six month extension. The USFWS will accept written comments on the proposed rule up to September 19, 2013. In June 2012, U.S. Rep. John Carter of Texas introduced federal legislation to try and stop the federal government from placing these salamanders onto the Endangered Species List, claiming that if the amphibians are federally protected, development in Williamson, Travis, and Bell counties could stop.