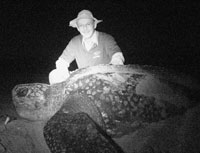 Tracked by the same technology used to monitor the species’ trans-Pacific migration, the turtles were the focus of The Great Turtle Race II, an international sea turtle conservation event raising awareness of the critically endangered reptile’s plight. Two decades ago about 115,000 leatherbacks swam in the Pacific Ocean according to some estimates, but fewer than 5,000 are estimated there now.

As conservationists, educators and students from the U.S., China and Indonesia watched online, the leatherback named Saphira II was the first to cross the finish line, the international date line in the middle of the Pacific. Like her 10 competitors, the female tagged in Monterey Bay, Calif., had traveled more than 3,000 miles.

Yet for Mike Milne of the Sea Turtle Restoration Project, one of the event's organizers, the event wasn’t just about who won. "The Great Turtle Race is about sharing information on one of the most amazing inhabitants of our ocean: a Volkswagon-Beetle-sized turtle that has outlived the dinosaurs," he said.

Watch the race at www.greatturtlerace.com.