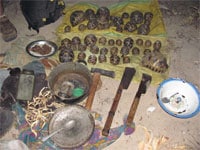 Radiated tortoise poachers were apprehended in Madagascar thanks to a tip from a local citizen.

A group of conservationists and law enforcement officials recently tracked down radiated tortoise (Geochelone radiata) poachers near Lavavolo, Madagascar, and found them with 48 of the rare tortoises, 47 of which were still alive, according to the Turtle Survival Alliance.

Conservation organizations were holding a meeting in the village of Lavavolo when they were informed of the poachers' presence by a local citizen. A team of conservationists and law enforcement officials found the poachers' camp in a forested area about three miles away from Lavavolo. The three poachers in the camp brandished weapons, and one escaped. Authorities believe they may know the hometown of the escaped poacher.

One of the radiated tortoises, a female, had already been eaten. The rest were found alive and packed in bags according to size. They appear to be less than 10 years old.

Herilala Randriamahazo, TSA's full-time Malagasy tortoise conservation coordinator, was a part of the team that apprehended the poachers. Randriamahazo has been in his position for a little over a month.

Local Mahafaly villagers consider it taboo to eat radiated tortoises and are engaged in the protection of the species. Because of this, they made the decision to inform the authorities of the poachers' camp, according to the TSA.

The radiated tortoise is listed as Critically Endangered by the International Union for Conservation of Nature.