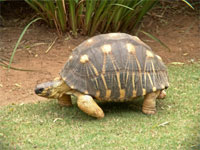 The radiated tortoise (Geochelone radiata) could become extinct within the next 20 years.

The radiated tortoise (Geochelone radiata) will most likely be extinct within 20 years, according to the Wildlife Conservation Society and Turtle Survival Alliance. The species, native to the spiny thickets of southern Madagascar, once numbered in the millions. Now the tortoise is hunted for food, and the WCS and TSA’s field teams found large tracts of land with no signs of G. radiata.

The biologists, however, have found evidence of the radiated tortoise in deserted poaching camps. These sites are strewn with the discarded remains of radiated tortoises. Locals have reported seeing armed poachers driving trucks filled with the animals.

Southern Madagascar is currently in the holds of a longstanding drought, and the country as a whole has suffered from deforestation and surface water contamination. As a result, food is scarce in the country, and the radiated tortoise is sought for its meat and for monetary gain.

The number of radiated tortoises near populated areas of southern Madagascar is plunging, and it’s feared that poachers will hunt for them in protected sites, like national parks. The staffs in these areas aren’t able to fend off the poachers.

During the 1980s and 90s, the IUCN Red List categorized the radiated tortoise as Vulnerable; since 2008, the species has been listed as Critically Endangered. Conservationists believe the only way to save G. radiata is through community-based action. At this point, no significant, clear-cut plans have been announced.