Tokay Gecko Under Threat Due To Bogus Claims The Lizard Can Cure HIV And Other Ailments, Report Says

The tokay gecko (Gekko gecko) is under threat due to claims that the lizard has properties in it that can help treat the HIV virus, cancer, and other ailments, TRAFFIC Southeast Asia said in a report released today. The wildlife trade network, which monitors the trade of the world's animals, says that the unfounded claims that eating the tokay gecko can cure HIV has caused the trade of the herp to skyrocket, with a single specimen reportedly commanding a $US900 price in the Philippines, where the Tokay gecko, or Tuko, is widely available and interweaved in that island nation's folklore. 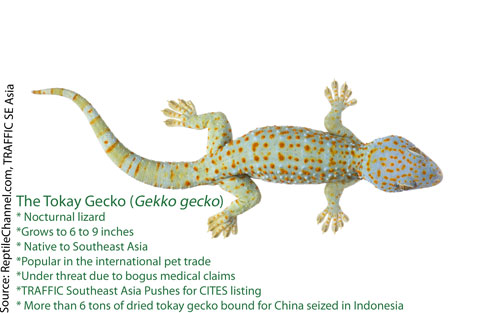 Contrary to folklore, the Tokay gecko cannot cure HIV, cancer or any other ailments.

"TRAFFIC is alarmed at the massive increase in trade of these geckos," Chris R. Shepherd, deputy director of TRAFFIC Southeast Asia said in a prepared statement. "If the trade continues to mushroom, it could take years to repair the damage currently being inflicted on gecko populations. Protection under CITES should urgently be considered as a stitch in time for the Tokay Gecko."

According to the report, Malaysian-based websites have popped up, dedicated to the buying and selling of Gekko gecko. They are being sourced throughout Southeast Asia, with the bulk coming from the Philippines, so much so that Philippine Senator Manny Villar filed a senate resolution that implored the trade and commerce committee to conduct an inquiry on the trading of geckos, in an effort to craft laws to protect the lizard from threats and ensure their survival in the country.

The report claims that Indonesia exports an estimated 1.2 million dried tokay geckos from the island of Java every year, and two weeks ago, custom officials there seized 6.7 tons of the dried lizard apparently bound for Hong Kong and China.

The tokay gecko grows to 6 to 9 inches and inhabits forest trees and human dwellings in the wild. It is native to Southeast Asia and is a nocturnal lizard. Very popular in the pet trade, the tokay gecko is one of the most popular gecko species with beginning hobbyists. The TRAFFIC report can be found here.