Replica of world's largest snake (Titanoboa cerrejonensis) to travel to museums across the country.

Titanoboa, the prehistoric snake that scientists say measured 48 feet long, 27 inches wide, and weighed 2,500 pounds has slithered its way into Grand Central Station by way of a full scale replica, which is part of the Smithsonian National Museum of Natural History traveling exhibit, "Titanoboa: Monster Snake" that runs March 30-January 6, 2013. After Titanoboa leaves Grand Central Station tonight, it will head to Washington D.C as part of the exhibit that will travel to museums across the country to showcase the giant constrictor. A documentary on Titanoboa will air on the Smithsonian Channel April 1 at 8 p.m. ET/PT. 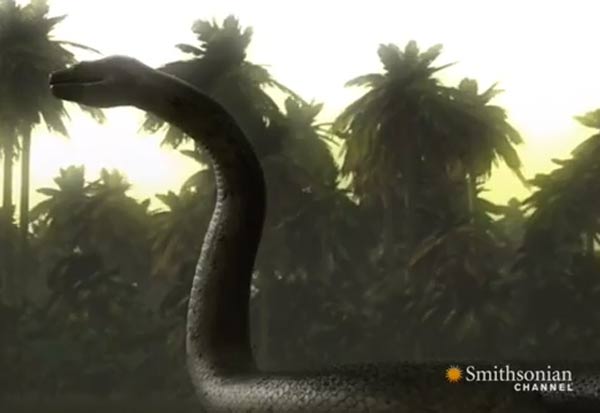 A screenshot of what Titanoboa may have looked like.

Fossils of Titanoboa (Titanoboa cerrejonensis), which lived more than 60 million years ago, were discovered in a Colombian coal mine in 2005, including three fairly intact skulls, by a team of scientists led by Dr. Jonathan Bloch of the University of Florida and Dr. Carlos Jaramillo of the Smithsonian Tropical Research Institute in Panama.