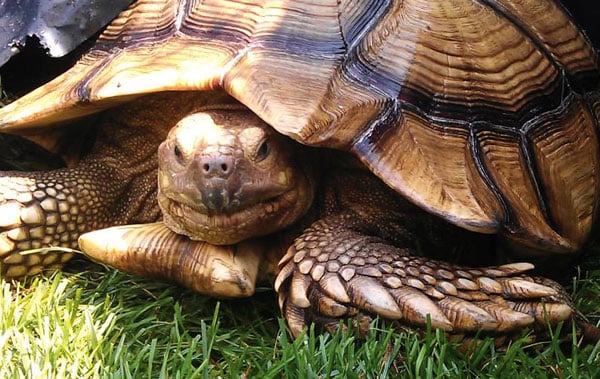 Dear Dr. Mader, I am a tortoise enthusiast and a huge fan of yours. I am in the process of finishing my prerequisite courses for veterinary sch

I am a tortoise enthusiast and a huge fan of yours. I am in the process of finishing my prerequisite courses for veterinary school. I am writing because I wanted to share with you the story of my sulcata tortoise, Fred. 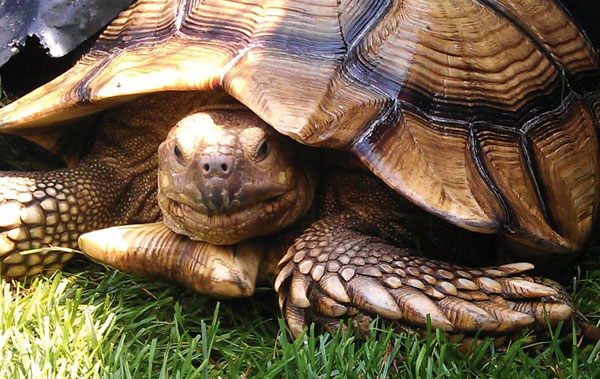 I inherited Fred after my best friend Karl passed away in 2011. Karl was a veterinary ophthalmologist and rescued Fred while he was living in Florida. Fred was approximately 15 years old and essentially dumped at a reptile house. Karl, noticing his pyramided shell, felt compelled to give him a home where he would receive the care and attention he deserved.

I immediately bonded with Fred, despite having virtually no reptile exposure or experience prior to him. He quickly started eating food from my hand, enjoying sprays with the garden hose, chin scratches and nosily inserting himself into any yard work or activity I was working on while in close proximity to him.

Only a few months after Karl adopted Fred, he passed away suddenly of an undetected brain aneurism. I was devastated by the loss of my best friend and found the thought of Fred being passed along to yet another home completely heartbreaking, so I decided to become his caretaker. I had no idea how to care for a sulcata, but I made it my business to find out as much as possible.

Prior to life with Fred, I had no idea how much personality these creatures possessed and how truly incredible they are. Eighteen months went by without so much as a blip on the radar health wise for Fred. In May of 2013, one of Fred’s first days outdoors from winter retreat inside, we were seriously alarmed to see he suddenly could not use his back legs. He was dragging them and did not seem to have feeling in them. Additionally, he stopped producing bowel movements. After five agonizing weeks of running back and forth to University of Illinois’ veterinary teaching hospital for diagnostics, we discovered from a 3-D CT scan that Fred had a spinal abnormality.

His vet, Dr. Mark Mitchell, believed it to be the result of some sort of trauma Fred suffered as a younger tort. One of his ribs was completely detached from his spinal column; therefore, the rib that remained attached acted like a strut and pulled his spine to the left as it grew. When he reached “critical mass,” the curvature became too severe and impinged his cord.

Together with an orthopedic veterinarian, Dr. Mitchell performed a six-hour surgery on Fred. They removed a section of his carapace and shaved down the vertebrae, which relieved the pressure on his spinal cord. Almost instantly, Fred had tone back in his tail, which he hadn’t had for nearly five weeks. The night of surgery and following day, Fred was doing well. However, by the evening of the second night post op, he took a turn for the worst and his body began to shut down.

The weeks he endured without being able to eliminate waste and toxins, was ultimately too much for his weakened body to handle. This was a heartbreaking loss not only for me and my family, but the doctors and students that had grown to love Fred. I’m not a veterinarian, obviously, but in my heart of hearts, I believed that had we been able to diagnose and operate sooner, he would have survived.

Dr. Mitchell is currently writing a manuscript detailing every aspect of Fred’s case and history. I felt compelled to reach out to you and tell you Fred’s story. One of my dearest vet friends gave me a copy of Reptile Medicine and Surgery as a gift shortly after Fred became part of my family. Not only is your book my most valued and trusted resource for anything and everything tortoise-related, it is my constant reminder of how patients like Fred, and doctors like yourself and Dr. Mitchell, are moving the field of veterinary medicine forward for these incredible creatures. I am amazed by how little we truly know about tortoises. I’m so grateful to the doctors like you, who raise the questions and perform the research necessary to learn all we can about these animals.

I know that Fred’s case has been presented to students at the University of Illinois. I am grateful that through his suffering and loss, he has left a legacy. I’m honored that he is able to teach the world more about tortoises. Even though I don’t know you personally and you were not involved in Fred’s case, I felt the need to thank you. Thank you for your passion for reptiles. Thank you for collaborating with other experts in the field and publishing your knowledge. Thank you for advancing the field of veterinary medicine so that surgeries like Fred’s could even have been attempted. Thank you for being a role model to future veterinarians like myself.
Alison Haverty, Chicago

Dear Alison,
Thank you for such an endearing letter. Fred was lucky to have you as a steward for his final days, and you were both lucky to have Dr. Mitchell and his exceptional team as his caregivers. I understand, from talking to Dr. Mitchell, that you are studying to be a veterinarian. I know that you will continue with the pursuit for continuing excellence in reptile medical care. All the best.  —Dr. M