The New Guinea small-eyed snake is a secretive nocturnal elapid with a striking patterning that ranges from red bands on a white background in juveniles, to buff or brown bands on a lighter brown background in adults.

The New Guinea small-eyed snake is a secretive nocturnal elapid with a striking patterning that ranges from red bands on a white background in juveniles, to buff or brown bands on a lighter brown background in adults. Bands are more numerous posteriorly, and the tail may be entirely dark. The head is usually grey, and the eyes are small. Small-eyed snakes bite plantation workers, grass-cutters and villagers. They encounter these snakes abroad at night or in the early morning, especially during the wet season. The snakes are easiest to find in the drier weather when they are hidden inside the coconut husk piles. 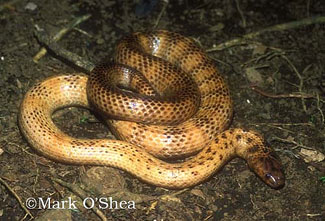 New Guinea small-eyed snakes are local only to the island of New Guinea.

ELISA (enzyme-linked immunosorbant assay) analysis at the Liverpool School of Tropical Medicine compared venom (collected by myself) with serum samples from fatal snakebite victims from Madang hospitals. This proved what we long considered possible — that the small-eyed snake is capable of delivering a fatal bite to humans. Currently, there is no specific antivenom, though the expensive CSL Australo-Papuan polyvalent does work. Apparently the CSL Tigersnake antivenom does too, although the CSL Death adder commonly held in Madang hospitals is inappropriate.

The small-eyed snake is a fairly powerful and aggressive species when it is captured. It will strike to the side like a krait, and it has a powerful neck, so it requires considerable restraint. I have witnessed both ophiophagy (on a ground boa) and cannibalism in this species, but both are common elapid practices. I do not currently recognize the subspecies designation of M. i. fasciatus, purportedly from the Aru Islands. In canvassing 33 institutions and museums worldwide, I located more 200 specimens of M. ikaheka from almost 100 locations but none were afforded subspecies status. I have collected and milked upwards of 40 specimens in the field for venom research purposes. 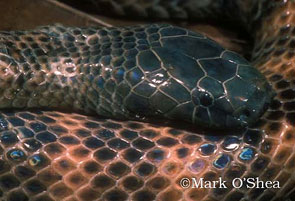 The small-eyed snakes are also called the "land eel".

McDowell, S.B. 1970. “On the status and relationships of the Solomon Island elapid snakes.” Journal of the Zoological Society of London 161:145-190.