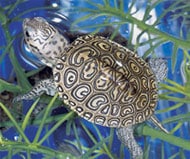 Did you hear about all the diamondback terrapins – 78 in all – that shut down a runway and delayed flights at John F. Kennedy International Airport in New York last week? The terrapins emerged from nearby Jamaica Bay in search of breeding grounds. It would have been interesting to have been a passenger on one of the delayed flights, perhaps gazing out the window while waiting to be cleared for takeoff and seeing a bunch of Port Authority workers scrambling to pick up and relocate a bunch of turtles. That’s my kind of delay!

I’ve encountered confusion about the difference between a terrapin and a turtle. The word “terrapin” is defined by Webster’s as any of the North American terrestrial freshwater or tidal turtles belonging to the family Emydidae. However, this does not ring true in terms of common usage, as the only North American turtle referred to using the word “terrapin” is the diamondback terrapin. But taken literally, the Webster’s definition seems to indicate that all the turtles in the various subfamilies to Emydidae (could also be referred to as terrapins: sliders, painted turtles, map turtles and so on.

I think adding to the confusion is the United Kingdom usage of “terrapin” as being synonymous with “turtle” over here in the U.S. In England a terrapin is a freshwater-inhabiting chelonian, and a turtle is a sea turtle. And let’s not even get started on Australia, where “tortoise” is used as “turtle” is here.

Diamondback terrapin meat was considered something of a delicacy and the turtle was hunted nearly to extinction. Currently it is listed on the IUCN red list as “near threatened.” If you’re not familiar with the IUCN Red List, here’s a description, courtesy the organization’s website: “The IUCN Red List of Threatened Species provides taxonomic, conservation status and distribution information on plants and animals that have been globally evaluated using the IUCN Red List Categories and Criteria. This system is designed to determine the relative risk of extinction, and the main purpose of the IUCN Red List is to catalogue and highlight those plants and animals that are facing a higher risk of global extinction (i.e., those listed as Critically Endangered, Endangered and Vulnerable).” Luckily, the diamondback terrapin does not fall into one of these latter categories, but that doesn’t mean it won’t someday. Although it does not have any federal protection it is afforded some local protection within its range along the eastern and southern coasts of the U.S.

The diamondback terrapin is a great-looking turtle (I know it’s called a terrapin, but it’s still a turtle), with white skin adorned with black dots and a beautiful shell from which it gets its common name (check out the pictures above). If you’re interested in buying one always look for captive-bred specimens. There is controversy within the reptile industry regarding wild-caught diamondback terrapins that are being sold under the guise of being captive bred. If you’re interested in purchasing a pet terrapin you’ve got a better chance of knowing that one for sale is a captive-bred specimen if it’s a baby. Old adults for sale could be wild caught.

Years ago I had a pet diamondback terrapin that I kept in a plastic kiddy wading pool in my backyard. It was this turtle that taught me the lesson that some turtles are very adept at climbing. It managed to climb up the smooth plastic wall of that pool. It must have had quite a reach to pull itself up, because I know there were no branches or rocks upon which it could stand in order to heave itself over the top of the pool’s wall. This escaping terrapin taught me to refine my screening-securement methods on that pool.

Diamondback terrapins…is there nothing they can’t do?