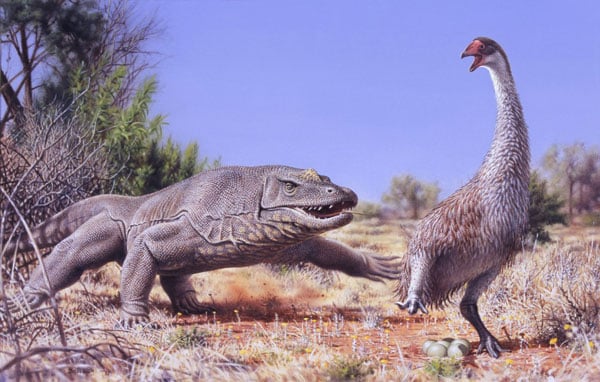 Eleven feet or 20, Varanus priscus was a formidable lizard.

You think the Komodo dragon is huge? Feast your eyes on Megalania prisca, (Varanus priscus) which was discovered in the 1800s in Australia. In 1858, Anatomist Richard Owen studied and described the vertebrae, which measured three inches in length and two inches in height, and speculated that the lizard was about 20 feet in length from its snout to the end of its tail.

While Owen said the reptile was 20 feet in length, others over the years came up with different theories which significantly reduced the size of the Australian lizard.  For one, later paleontologists have said that the bones are so similar to that of smaller lizards belonging to the Varanus genus that they have started calling it Varanus priscus.

Anatomist Stephen Wroe in 2002 took a look at old body size data of the lizard and said Varanus priscus was probably around 11 feet in total length. In 2004, paleontologist Ralph Molnar believed that the lizard could measure as much as 23 to 26 feet in length fully grown. And in 2012, paleontologist Jack Conrad and colleagues wrote in a research paper describing a large Varanus lizard found in Greece that the Australian Varanus priscus probably had a body length of around seven feet and a total length much longer that the 11 feet estimates that Wroe had theorized in 2002.

The questioning aside, most scientists agree that Varanus priscus was a huge monitor lizard that hunted and lived during Australia's Ice Age. National Geographic has done an interesting story on the lizard and the debate it has caused over the decades with regard to its size.