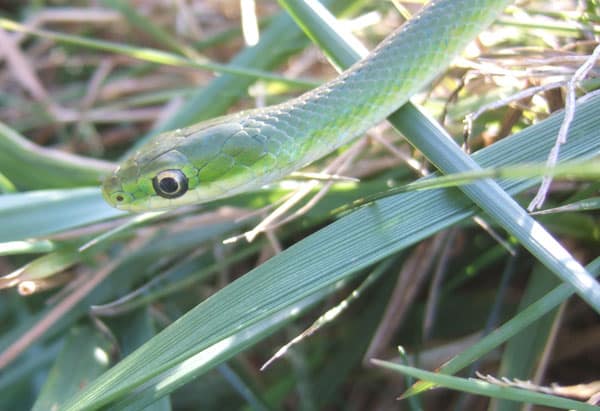 The natural history and captive care of Opheodrys vernalis.

I grew up on Cape Cod in Massachusetts and was only able to get my hands on a few different snake species as a child, one being the smooth green snake (Opheodrys vernalis). It would be many years later, however, long after my days of youth, that I would encounter another such species in the genus, the rough green snake (Opheodrys aestivus). Having read everything available to me on the subject of herpetology, I became aware of the rough green snake at an early age, and I knew it was just out of my reach geographically. I also knew that it is larger and, well, rougher all around than the familiar O. vernalis. From the old photos I had viewed in books by Ditmars, Breen and Carr, it really didn’t appear to have a leg to stand on (no pun intended) as far as grace was concerned when compared to the smooth green snake.

It wasn’t until one fateful herping trip many years into my adult hood, while standing over a small creek in New Jersey watching spotted turtles, that I noticed something out of the corner of my eye that changed my view forever. There, overhanging the water in a thick tangle of bittersweet vines, was a rough green snake! It was the first I had ever seen in captivity or nature, and I discovered quite accidentally. As I approached, it stayed absolutely still and didn’t even attempt escape. It was difficult to tell exactly where the snake began and where it ended, but I eventually untangled this creature, which looked like a smooth green snake on steroids. I was immediately captivated by its grace and beauty. 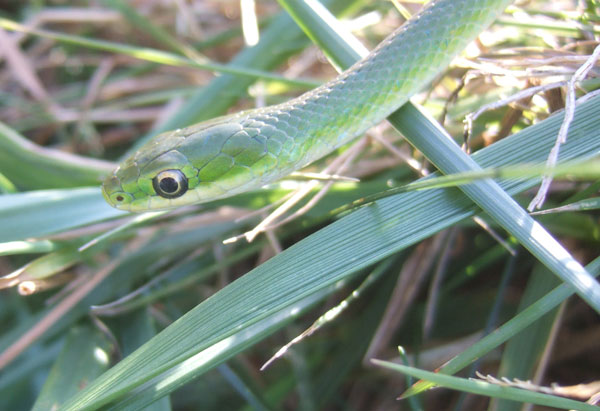 These thin snakes actually eat insects rather than rodents.

First described by Swedish botanist and zoologist Carl Linnaeus in 1766, Coluber aestivus would go through a series of taxonomical changes before finally settling on Opheodrys aestivus. Two species of rough green snake are recognized, the northern rough green snake (O. a. aestivus) and the Florida rough green snake (O. a. carinatus). A long, slender snake of almost 4 feet at its largest (although the rare, 40-inch long specimen has been reported), the rough green snake has a dark, emerald-green dorsal side, with a bright, electric-yellow chin and yellowish-white underbelly. This species is found throughout much of the United States, from southern New Jersey, south to Florida, west to Indiana and central Texas, and into northeastern Mexico. When it comes to gender, both sexes are quite similar, but adult females tend to have a much wider girth and heavier body than the males. The rough green snake is structurally different than its smaller cousin, the smooth green snake (O. vernalis), in that it has a much more rigid, vine-like body and each of O. aestivus’ scales are adorned with a raised keel down the middle, giving it a very abrasive feel. The head of the rough green snake is more elongate than that of the smooth green snake.

The rough green snake is one of the most exploited species of snake in the industry. Thousands of these gentle animals are removed from nature every year and recklessly thrown into the pet trade. The cost of the rough green snake is rather low, at an average of $8 each wholesale. Because of this low dollar value, there is not the push for captive-breeding projects. Rough green snakes stress very easily, and when transported in crowded containers, they rarely recover enough to thrive in captivity beyond the pet shop. If you are fortunate enough to come across healthy specimens, I would encourage you to follow through and attempt to breed these amazing animals.

Rough green snakes are relatively easy to keep and breed when a few minor details are paid attention to. Opheodrys aestivus requires a roomy enclosure, so a glass tank, preferably 55 gallons or better, will suffice and comfortably house an adult pair. They are very private animals and rely on a heavily planted captive environment to reduce stress and encourage natural behavior. Artificial foliage can be used and will make life easier for you. A gravel substrate should be used to help reduce the risk of unwanted parasites and a water bowl with fresh drinking water should be provided. Keep ambient temperatures between 82 and 85 degrees Fahrenheit. Use an over-head, low-wattage basking light to offer a hot spot that reaches between 88 to 90 degrees. The rough green snake will benefit greatly from a full-spectrum, over-head light in addition to the basking light. The full-spectrum light will encourage natural behavior and leave your snake psychologically well off, too.

Although the rough green snake is a relatively gentle animal and bites are rare at best, it is best to keep handling to a minimum. Rough green snakes are sensitive animals, and they stress easily and often fail to thrive with a lot of handling in captivity. Less handling also means less chance of the keeper passing some unwanted bacteria on to the kept.

Captive breeding can be achieved by reducing the amount of daylight and ambient temperatures in your snake’s enclosure gradually at the onset of fall. Around the end of August, daylight hours should start to be gradually reduced and this can be led by the reduction of daylight hours outside as long as your captive snakes are in a room with a window. With the reduction of daylight, a nighttime reduction in temperatures should also be incorporated and this should be done gradually, by as many as 5 degrees every one or two weeks until the desired temperature is reached. These changes to the snake’s natural cycle will encourage the snake to slow down and stop feeding naturally and give the snake time enough to void its bowels, preventing complications due to bacteria and impaction while hibernating.

Snakes should ultimately be cooled to temperatures just below 50 degrees, 24 hours a day, and this reduction in temperature should last approximately three months, after which temperatures can slowly be raised back to normal. Approximately 30 days after coming out of brumation, snakes will begin to show signs of breeding behavior and copulation will occur. Males will approach a female and crawl over her body, moving his head from side to side. If she is receptive, she will lift her tail and allow copulation. This breeding behavior may go on for as long as a week with multiple copulation attempts. Five to 10 eggs are typically laid loosely within the enclosure and should be removed to be incubated artificially. Collected eggs should be handled carefully and not turned or rolled. The eggs and be placed in dampened vermiculite and incubated successfully at 84 degrees. Eggs will produce small, dark neonates. After 30 to 45 days, just after they complete their first skin shed, they will be ready to feed.