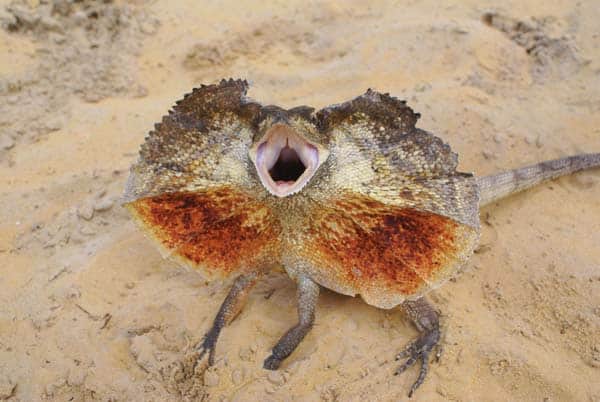 The frilled dragon (Chlamydosaurus kingii) is arguably the most recognizable of all lizards and for good reason. The expanse of the skin flap around its neck can reach dinner-plate proportions, and when the lizard is threatened, the vibrant colors within the frill explode to life. It’s a sharp contrast to the overall earthy brown and gray tones the lizard generally possesses when it’s calm. A large, bright-white to yellow, open mouth with fanglike teeth measuring one-eighth inch are also part of this defensive display, which deters potential predators by making the lizard look too big — or scary — to swallow. 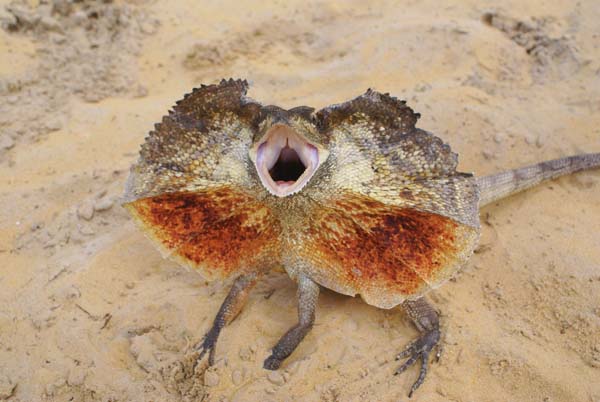 Frillies are peaceful lizards once established.

If this technique doesn’t work, frillies can take off on their hind legs and boogie down to the nearest tree. They’ve also been known to calmly bipedal around when searching for food or mates. Who wouldn’t want one of these lizards?

From the beautifully red variations in the Northern Territory to the more silvery lizards of Queensland, frilled dragons occur throughout the northern top-third of Australia. However, the most commonly imported lizards are from southern New Guinea, which tend to be about one-third smaller and generally more subtly marked and colored than Australian frillies.

The tail comprises about two-thirds of the animal’s overall length, and mature males have much larger, broader heads and usually longer frills, making it quite easy to visually determine the sex of older lizards. Females have a thicker abdominal area and measure about one-third smaller than the males. 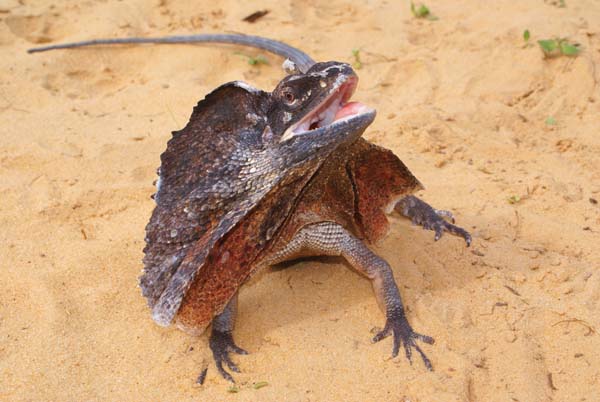 Frillies are peaceful lizards once established. They love to assume a tree-hugging position, and if they’re nervous, they’ll squirrel around the backside of the trunk to avoid being seen. After settling in, they appear quite intelligent and readily take food from their keepers. They are also easy to scoop out of their enclosures for inspection or handling once trust has been established.

Frilled dragons attain larger proportions than many common pet lizards, so they require more space and individual attention to meet their needs. Keeping a watchful eye on their behaviors and tweaking any issues they may have within their enclosures is important for their survival.

An arboreal species, frillies benefit from a tall cage with solid walls. It is OK, however, to have a front-viewing area. For juveniles up to 1 foot long, a tall 20-gallon aquarium or similar enclosure with the sides papered over would work fine for raising around three young dragons. 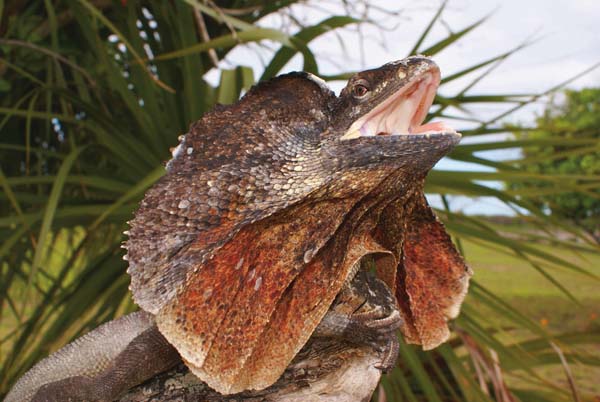 The expanse of the skin flap around its neck can reach dinner-plate proportions, and when the lizard is threatened, the vibrant colors within the frill explode to life.

When housing lizards together, it is important to observe how they interact. Healthy captive-born juveniles are quite easy to raise together, but wild-caught or farm-raised animals may need separation due to stress and parasites they may have accrued during importation. Lizards may look like they get along fine (they might sit or sleep on each other), but if one hogs the basking area while the other lies around most of the time, mental stress is likely hurting the more submissive lizard, which could weaken and die if it isn’t separated from more dominant cagemates. Another option is to introduce both to a larger enclosure with more than one basking area.

Once your lizard reaches 1 foot long, it needs a larger enclosure. Depending on how many lizards you have and the space available for future enclosures, you may want to set up a medium-sized cage, or just go ahead and build or buy the larger adult cage. A basic intermediate enclosure, which is also the absolute minimum for an adult, measures 3 feet long, 2 feet wide and 4 feet tall. This would work for a single lizard or possibly a pair of New Guinea frilled dragons because they don’t get as large as the Aussies. A more ideal adult cage for a pair or trio of Australian or New Guinea animals measures 4 feet long, 21⁄2 feet wide and 5 feet tall. If cage height is an issue, placing the enclosure on a stand or table provides the lizard with an elevated view, which helps the lizard feel more secure.

Wood, glass or acrylic-plastic cages all work fine, and the top should have metal screen or wire mesh. This way a clamp lamp or other light source can rest on top, and light and heat can filter through. If the top is of solid construction, install a few air vents on the topside walls for circulation, and mount the lights within, preferably on swivel fixtures for good light-beam positioning. Mount lights in a place where the lizard cannot touch the bulbs and burn itself.

Provide frilled dragons with climbing branches, but make sure crossing branches don’t touch because you don’t want the lizard’s tail or limbs to get pinched in between them. Pinched appendages may lead to necrosis in the fingers, or the tail may pop off, and these appendages don’t regenerate.

These sun worshippers require quality basking lights and UVB bulbs. The basking temperature should be around 115 degrees Fahrenheit, and ambient daytime temps should be in the low to mid-90s. Nighttime temps should decrease to the mid-70s on average. Create a daytime light cycle of 12 to 14 hours a day. Using inexpensive appliance timers makes this a hassle-free process for the lizardkeeper and maintains the animal in a timely circadian rhythm.

Set up branches at the right distance from the basking light. An enclosure with branches in many directions allows these lizards to choose their favorite spots for thermoregulation. Place a heat lamp above a branch on one side of the enclosure for a basking site, and on the other side place a quality UVB fluorescent. You could use a mercury vapor bulb, which provides heat and UVB, if the enclosure is large enough to maintain the correct environmental parameters.

Humidity plays an integral role in a frilled dragon’s life. In the wild their life cycle is mediated by heavy seasonal rains. During the dry season they’re dormant, bounding back to life when the rains begin. This is also a time when the whole food chain springs to life, so plenty of food is available for the onset of the lizard’s reproductive cycle.

In captivity misting frilled dragons daily is essential. Using either a spray bottle for a few minutes or a misting system to simulate the rain effect is fine. Ideal humidity ranges between 50 and 70 percent.

Substrate also plays an important role in maintaining humidity. Commercial reptile barks work fine, but I use equal parts of coco-fiber, potting soil or cypress mulch, and play sand. Check the label on the potting soil to make sure it’s either organic or free of pesticides, fungicides and fertilizers. Maintaining a substrate at least 2 inches thick along with daily mistings help retain humidity.

A shallow water pan in the enclosure  for bathing is a good idea. Frilled dragons typically drink when sprayed, but some lizards may come down for a drink in the bowl, and they may defecate in it, too. Be sure to keep their water fresh.

Fodder for the Frill 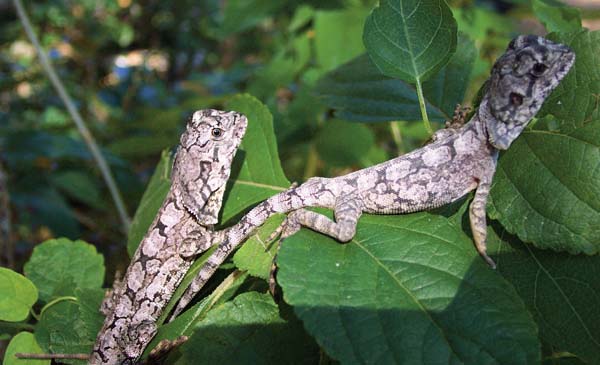 In captivity a well-rounded diet is highly recommended. This can include cockroaches, crickets, grasshoppers, superworms, caterpillars, Phoenix Worms and any other nonpoisonous, pesticide-free insect. Adding an appropriately sized mouse every two weeks rounds out the diet and provides extra calcium to larger individuals, especially during the breeding season. You may also experiment with a good salad or fruit mixture once a week, but if live food is gut-loaded, fruits and veggies aren’t really necessary. My frillies don’t eat them.

Dust insects with a high-quality calcium and vitamin D3 supplement. Do this daily for juveniles and gravid females, and every other feeding for yearlings to adults.

Frilled dragons make interesting, unforgettable pets, and they are fairly easy to keep when their needs are met. Perhaps, between the several Australian bloodlines now bred in captivity and the work various hobbyists are doing with New Guinea dragons, in the future some great color morphs will be available.  REPTILES

SCOTT CORNING owns DragonAttack and SailfinDragon.com in central Florida, and he focuses on captive propagation of rare agamid lizards and other unique animals. With more than 20 years experience keeping and breeding reptiles and insects, he has also managed two reptile stores, and he enjoys writing articles and photographing nature.