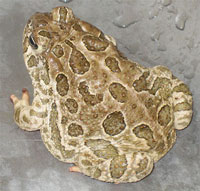 Let’s talk turkey. Turkey Burger, that is! She is my Great Plains toad, so named for her resemblance to a big, ground-turkey patty. She is perfectly plump, with rounded features, a light-colored mottled back and a creamy white-colored fat belly. When she is alarmed, she inflates like a big bumpy toad balloon, making it nearly impossible to pick her up with just one hand.

I came upon her last year some time in the fall, at none other than a reptile show. She was alone on a table nestled between containers of snakes and centipedes. Wedged inside of a small deli cup, she appeared deceptively petite at a glance, and I thought that she might make a good friend for my Texas toad. When I got her home, I freed her from her tight-fitting container and it was apparent that I had paid only $5 for at least $20 worth of toad! She seemed to spread like a giant super-continent, and I briefly toyed with the idea of calling her Pangea. I was amazed that this crafty toad had concealed the fact that she was a huge mass of flabby flesh!

I soon noticed that she had some injuries to her fingers on both of her hands that looked pretty severe. She had some very deep cuts and lacerations that needed first aid, so I looked for quick advice on the web in a reptile forum. I consulted these first to make absolutely sure that what I remembered reading in the past would be the best remedy and not be harmful to her. As a daily routine, I used a cotton swab to apply Neosporin to her wounds to avoid infection, and to help speed the healing process. It is really important to use the plain type without pain relief ingredients, as this is fatal to amphibians. I also put her on paper towels, in a cage by herself, in sort of a quarantine kind of situation. This ensured that nothing would further agitate or contaminate her wounds. She remained in her “fortress of solitoad” for several weeks until I was certain that she was completely healed and new skin had grown back over her fingertips.

The entire time that she was enduring my treatments, she still had a hearty appetite and would go after anything that moved — including my fingers. Thankfully, she never seemed to be in any pain and moved around like normal. She did squirm a lot and it was difficult to put the ointment on her fingers.

After the healing process was complete, she moved out of quarantine and into a deluxe toad apartment in the living room. Now she has more natural surroundings, but I still decided to keep her separate from the Texas toad. I felt that she would probably eat all of the food by herself and then possibly squash the other toad under her massive weight.

It still does trouble me not knowing what caused these terrible injuries. I went back to the seller at the next show to ask what may have happened to her, but he didn’t know. I have imagined a number of possibilities…

1) She was a member of a traveling group of stunt toads and circus frogs and was badly injured in some death-defying performance, possibly involving a cannon. She was then left behind when they fled and quickly captured for the pet trade.

2) She was jogging through a bad neighborhood and was jumped. While fending off her attackers, she sustained the defensive wounds on her hands when they tried to stab her to take her wallet.

I guess we will never know for sure what happened, but I am just glad that she is fully healed and happy. She is ready to take on whatever cricket (or foe) that comes her way. All that she asks is that her next meal be just like her — SUPERSIZED!