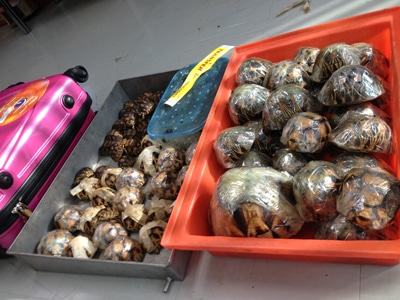 It is estimated that just 400 Astrochelys yniphora exist in the wild.

Authorities at Suvarnabhumi International Airport in Thailand arrested a man and a woman who attempted to smuggle 54 critically endangered Ploughshare Tortoises (Astrochelys yniphora) and 21 critically endangered radiated tortoises (Astrochelys radiata) into Thailand. The attempted smuggling of these chelonians occurred just one day after the CITES meetings held last month in Bangkok, according to Traffic.org, a website that tracks the illegal animal trade. Dr. Theerapat Prayurasiddhi, Deputy Director of Thailand's Department of National Parks, Wildlife and Plant Conservation said in a press conference March 22 that the Thai man had been arrested earlier in the year on another wildlife smuggling charge and believes that the man, who gained entry into the baggage terminal at the airport and was not a passenger, was aided by others who attempted to smuggle the tortoises into the country. The woman, who traveled from Madagascar to Bangkok via Nairobi, Kenya was apparently the smuggler of the tortoises. 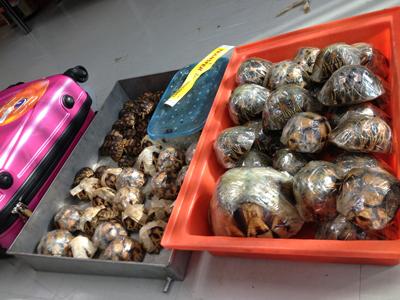 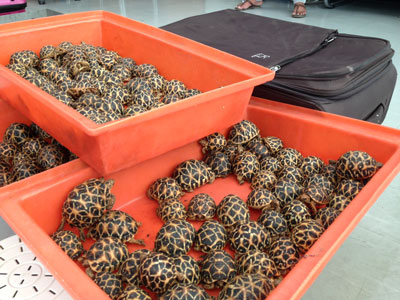 According to Traffic.org, dozens of seizures of Indian star tortoises have occurred at Suvarnabhumi International Airport. Most of these animals were found in the luggage of incoming passengers. From 2010-2012, Thai officials have seized more than 4,000 tortoises and freshwater turtles, half of which were Indian star tortoises.

At the CITES meeting that concluded in Thailand last month, Thai and Madagascar officials discussed their plans to share intelligence resources and cooperate in other ways to combat the illegal trade of wildlife from Madagascar to Thailand, including a plan for a Memorandum of Understanding between both countries to enhance communications, raise the profile of wildlife smuggling, carry out joint investigations, and work toward repatriating animals to their home countries.