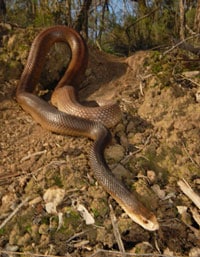 Supplement to the August 2008 REPTILES magazine article "Taipan Number One."

Currently there are three named taipan species: Oxyuranus scutellatus, O. microlepidota and O. temporalis. With its ghost-white snout and coffin-shaped head, the coastal taipan (O. scutellatus) is found along the coast of Queensland and nearby areas of Australia. However, as one moves outside this range into northern New South Wales, the Northern Territory or northwest Western Australia, populations are scattered and scarce. 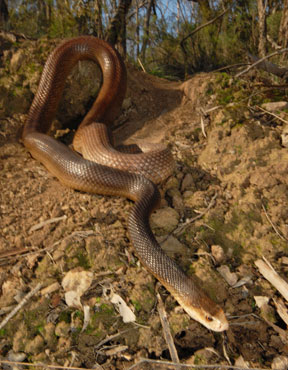 Coastal taipans (Oxyuranus scutellatus) tend to darken during the winter. 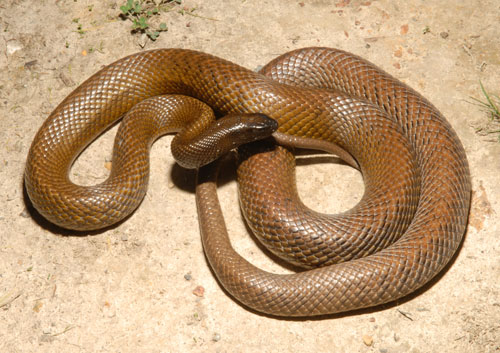 The species also occurs in New Guinea. Two distinct races are found there. Coastal taipans from Irian Jaya and nearby are essentially similar to the Queensland animals. Those from east Papua New Guinea, such as Port Moresby, are distinctly grayish-black. Known as O. scutellatus canni, they often have orange coloring along the middorsal line.

Coastal taipans from northwest Australia (O. scutellatus barringeri) are usually more reddish than their eastern cousins. But no matter what their color, coastal taipans tend to darken during the winter.

The inland taipan (Oxyuranus microlepidota) varies in color, but it usually has a darkish head and snout. Snakes from eastern Australia’s inland areas of black soil and floodplains are usually brownish, but the color varies seasonally. The darker winter color includes a blackish head.

These snakes are superficially similar to some western brown snakes (Pseudonaja nuchalis) found in the same areas. At a glance, it’s often impossible to tell the two species apart. But taipans have 23 midbody rows, and brown snakes have only 17 to 19.

Not much is known about the newly named taxon Oxyuranus temporalis from inland Western Australia. The original diagnosis for the species was weak and in parts erroneous, and it was based on a single dead museum specimen. The snake is similar in many respects to O. scutellatus.