Bonus content from the May 2009 REPTILES magazine article "Spurred Samsons."

Captive African spurred tortoises (Centrochelys [Geochelone] sulcata) may mate throughout the year, but it begins in earnest in autumn when morning temperatures are cooler. Males court females by ramming them, steering them into obstacles or attempting to get in front of them. The goal is to stop a female long enough for a male to mount her. Mating is accompanied by hoarse grunts that can be quite loud. 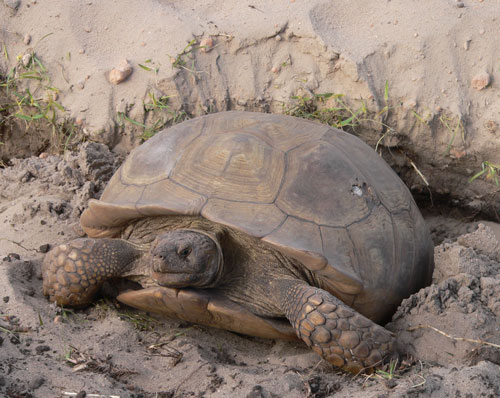 A female sulcata uses her back legs to dig a nest

In a small enclosure a persistent male can do serious damage to a female’s shell. This is also the time that males can become really aggressive toward each other. Males attempt to tip opponents on their backs by getting under an opponent’s shell or by using their gular (throat) spurs. Gulars can do serious damage to a rival’s shell and skin, and a tortoise unable to right itself in a sunny area can overheat and die. 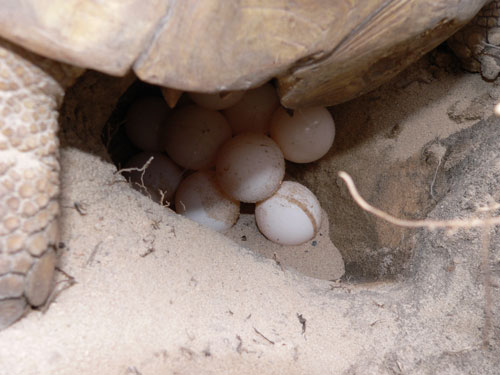 Unless you have a large group of sulcatas, one male is enough for at least four females. If you have multiple males in an enclosure, the pen should be large enough to allow the losing male to withdraw. Some barriers, such as bushes, wall sections or large rocks, in the pen are also beneficial because they break up the pen visually and allow smaller males to hide. If you have multiple males in an outdoor pen, you also need to routinely check for flipped tortoises, especially during breeding season.

In captivity nesting occurs between six and eight weeks after mating. Females begin by digging a pit with their front legs. Usually against an object, such as a pen wall, the pit is sloped deeper on one end and looks like the start of a burrow. Then a female backs into the pit and excavates the egg chamber with her rear legs. Next she deposits the eggs and meticulously covers the nest. The whole process can take hours.

Sulcatas exhibit a degree of nest protection. The behavior isn’t as intense as what is seen with Manouria emys, but it is more than what is observed in other tortoises. I have seen a female continue to work soil over her nest up to three days after nesting. Many females in my collection become aggressive, to varying degrees, if they find you or another tortoise around their nests the first few days. When digging up nests, I have had females come speeding (for a tortoise) 30 to 40 yards across a pen to confront me, and they returned numerous times after being relocated. Some have attempted biting, but most just pull their head into their shell and begin ramming whatever is closest. A 60- to 100-pound tortoise attempting to push the front edge of its shell into your body is definitely an attention getter. Once I withdraw, they immediately recover their nests, even if they are empty. Each female is different, and some skip the aggression and just begin methodically closing the nest as you attempt to dig it up.

Females may produce many clutches in a year. With the animals I work with, the most has been five clutches from a single female in a season. Clutches were spaced 30 to 40 days apart. Clutch sizes tend to fall between 12 to 24 eggs, but I have had a clutch of 42 eggs. With numbers like these, it is easy to see why so many sulcatas are for sale.

Collect eggs as soon as possible to protect them from predation. Place eggs in a container, and bury them midway in vermiculite moistened with water in a 1-.5 ratio by weight. Incubate them at 82 to 86 degrees Fahrenheit. Although temperature most likely determines sex, I am unaware of any studies showing details. Eggs typically hatch in 100 to 120 days.

Often most eggs hatch together over the course of a few days, but sometimes hatching takes place over weeks with nearly a month’s time between the first and last emerging hatchling. Leave hatchlings in the incubator tray until their yolks are mostly absorbed, and then place them in a tray on moistened paper towels until their plastrons seal.

Sexing sulcatas with a straight carapace length less than 12 inches can be difficult. Males eventually develop slightly concave plastrons and have longer, thicker tails than females. However, female sulcatas have comparatively longer tails than females of other tortoise species.

Want to read the full story? Pick up the May 2009 issue of REPTILES, or subscribe to get 12 months of articles just like this.