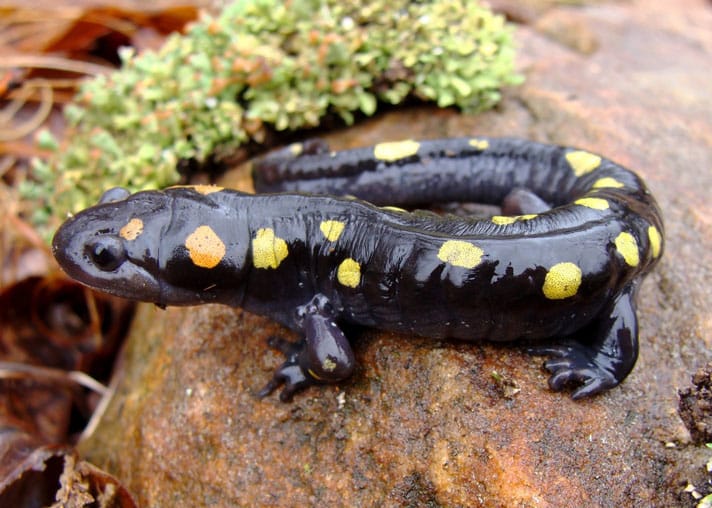 Spotted salamanders have always attracted a cult following of fans due to their submissive nature, ease of captive care and relative obscurity in the pet trade. Everyone I know of that has kept this species still keeps them to this day and has nothing but praise for them.

Spotted salamanders, although still somewhat obscure, do occasionally appear in the reptile trade. Spotted salamanders are relatively inexpensive, typically less than $20. Spotted salamanders can be found naturally throughout much of the eastern United States but are protected throughout some portions of their range. If you are collecting a wild specimen or two for captive care, please be aware of local laws regarding their possession and respect their presence in nature.

A thick layer of dampened substrate is necessary for spotted salamanders. I personally use ground pine bark mulch, which provides great moisture retention and high acidity for the reduction of harmful bacteria and fungus. This mulch also enables ease of burrowing for the spotted salamanders. If ground pine bark mulch is not available, ground peat moss, sphagnum moss or coconut mulch will suffice such as Zilla Fir & Sphagnum Peat Moss Reptile Bedding. Avoid substrate with strong odors or harsh oils, such as cedar mulch. Keep the substrate damp, but not wet, and change it completely once a month. Naturalistic décor such as logs, bark slabs and similar items can also be used. Be sure cage furnishings do not have sharp or rough edges that could damage the salamanders’ delicate skin.

Spotted salamanders do not drink water in the traditional way that most animals do. Many amphibians, including spotted salamanders, perfuse water through their skin and cloaca. When the substrate exhibits signs of dryness on the surface, spray it with fresh water to the point that pools are formed briefly (don’t keep the substrate completely drenched). Use non-chlorinated water such as spring water, or tap water that has been left exposed to the air overnight, which will eliminate the chlorine. Another option is to use a store-bought water conditioner, available at stores that sell tropical fish supplies, to remove chlorine and chloramines from the water.

In nature, late winter and early spring rains awaken spotted salamanders from their subterranean hibernation and bring them to the surface to breed. Male spotted salamanders may travel long distances to arrive at the temporary vernal pools where they themselves were produced. The male spotted salamanders will typically arrive first and scatter spermatophore in the form of small, white cones beneath the water. Female spotted salamanders arrive a day or two later and are prompted by anxious males to pick up the sperm cones with their swollen cloaca. Fertilization takes place internally and up to 200 eggs are laid in a jellylike smear. This substance rapidly absorbs water and creates a clear protective cushion around the eggs. Green algae sometimes grow within the gelatinous egg mass and increases oxygen levels that help increase larval development.

In order to successfully breed spotted salamanders in captivity, many of their natural stimuli and environmental needs must be met. This is difficult, if not impossible, to do indoors. If you live within the natural range of spotted salamanders, outdoor propagation can be attempted by constructing an area approximately 8 feet by 12 feet utilizing wooden or concrete walls sunken into the ground to a depth of about 10 inches. A shallow pool of water approximately 4 feet in diameter is necessary for laying eggs.

Adult spotted salamanders should be left in this shaded enclosure year-round to condition them to a natural reproductive cycle, and they typically breed in the early spring. Plenty of loose earth, a substrate such as sand, and high-acid forest debris in the form of deciduous tree leaves will enable your spotted salamanders to burrow beneath the frost line for hibernation during the winter months. Juvenile spotted salamanders, once hatched, should fare well if left in the outdoor pool throughout the summer, until they are developed for land travel. At that point, they can be cared for indoors, if desired. Be sure to watch pool water levels and monitor developing larvae frequently.

Leo Spinner, a native of Cape Cod, Mass., has been keeping, breeding and researching amphibians, reptiles and invertebrates for more than 39 years. Spotted salamanders have been a part of his life the entire time.