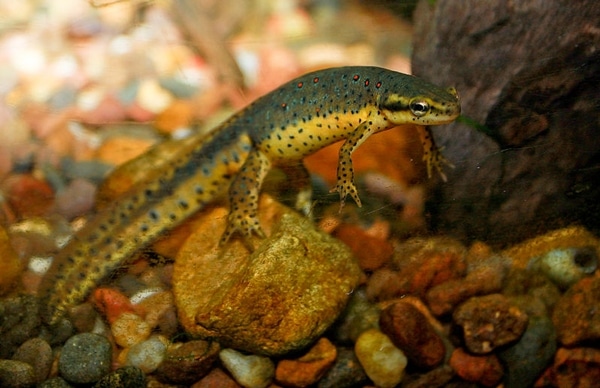 A higher population density of eastern newts increased the rate of Bsal transmission.

Researcher Daniel Malagon, a former undergraduate student with the University of Tennessee Institute of Agriculture’s Amphibian Disease Laboratory has been studying the incidence of the disease Batrachochytrium salamandrivorans in Europe and Asia and how the disease can be managed in the event that it arrives in the United States. 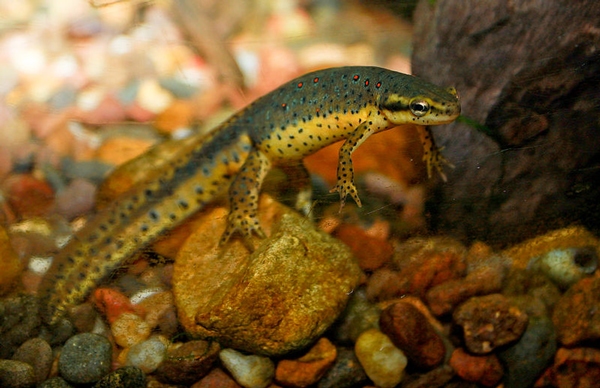 Adult male red-spotted newt, a subspecies of the eastern newt.

Malagon, who examined existing data from controlled experiments as well as computer simulations determined that host contact rates and habitat structure has profound effects on the rate of Bsal transmission in eastern newts (Notophthalmus viridescens).

“Wildlife and humans pathogens are quite similar. In fact, Daniel’s results support the strategy of social distancing being used to mitigate the COVID-19 outbreaks," Matt Gray, chair of the North American Bsal Task Force and Malagon's academic advisor told Williamson Herald. "By reducing host density in newts or humans, contact rates, and therefore transmission, are reduced. Habitat structure also reduced contact rates of newts, so transmission is curtailed in more complex habitats. This may be analogous to COVID-19 environments. A person may be more likely to become infected in a homogenous movie theater compared to walking through a heterogeneous forest, even if density of people was the same.”

The researchers created experiments to estimate contact rates and varying host densities and habitat structure. The estimated the probability of Bsal transmission from those infected with Bsal to those that are susceptible to the pathogen. Using data collected from the experiments the researchers modeled infection and disease outcomes "for a population of newts using a system of differential equations. We found that host contact rates were density-dependent, and that adding habitat structure reduced contacts," the researchers wrote in their paper.

"Our results suggest efficient pathogen spread in populations of highly susceptible salamander species, like the eastern newt. These populations will likely be negatively impacted if Bsal reaches North America. We hope our findings will help inform policy and management strategies to prevent the introduction of Bsal into North America," Malagon said.

In October 2017, scientists determined that there was zero evidence of Batrachochytrium salamandrivorans in the U.S. pet salamander grade and it has not been found in the United States. The importation of 201 salamander species was banned under the Lacey Act back in 2016 in an effort to prevent the spread of the pathogen, which has devastated fire salamander populations in the Netherlands.