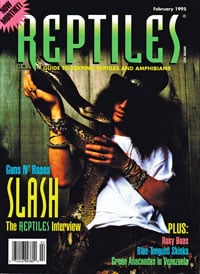 The iconic snake-loving guitarist has given up his snake collection.

An iconic snake-loving guitarist has given up his snake collection.

In an interview with Mojo magazine, Velvet Revolver’s Slash said he did so more than five years ago.

Keeping snakes since the age of 11, Slash was the subject of a REPTILES magazine cover interview in the February 1995 issue. Back then he said he was so used to reptiles that their large built-in cages had become part of his house and furniture.

Alas, more recently Slash told Mojo he was relieved to let the pets go. “Feeding them all by myself had become a bit of a job. I missed the old days when it was just a matter of finding a couple of dead rats around the corner.”

Read the REPTILES interview with Slash>>