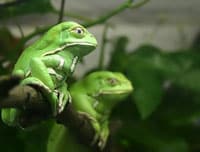 Scientists in Northern Ireland, based at Queen’s University Belfast, have discovered proteins in the skins of two species of frog that could be used to treat cancer, diabetes, and strokes, as well as assisting transplant patients by regulating the growth of blood vessels.

The award-winning research, led by Professor Chris Shaw at Queen’s School of Pharmacy, has identified two short protein chains, technically known as peptides, which can be used in a controlled and targeted way to regulate angiogenesis – the process by which blood vessels grow in the body. The discovery holds the potential to develop new treatments for more than seventy major diseases and conditions that affect over one billion people worldwide.

Mechanisms Of Action
The proteins have been found in secretions present on the skins of the waxy monkey frog (Phyllomedusa sauvagii), which originates from South America, and also the giant firebellied toad (Bombina maxima) found in China. Scientists capture the frogs and gently extract the secretions, before releasing them back in to the wild. The frogs are not harmed in any way during this process.

Professor Shaw said: “The proteins that we have discovered have the ability to either stimulate or inhibit the growth of blood vessels. By ‘switching off’ angiogenesis and inhibiting blood vessel growth, a protein from the waxy monkey frog has the potential to kill cancer tumors.

“Most cancer tumors can only grow to a certain size before they need blood vessels to grow into the tumor to supply it with vital oxygen and nutrients. Stopping the blood vessels from growing will make the tumor less likely to spread and may eventually kill it. This could therefore transform cancer from a terminal illness into a chronic condition.”

The secretion from the firebellied toad operates in a different way. “The protein identified in the case of the giant firebellied toad has been found to ‘switch on’ angiogenesis and stimulate blood vessel growth. This has the potential to treat an array of diseases and conditions that require blood vessels to repair quickly, such as wound healing, organ transplants, diabetic ulcers, and damage caused by strokes or heart conditions,” said Shaw.

The Value Of This Research
Explaining how his research team looks to the natural world to solve problems where other methods of drug discovery have failed, Professor Shaw said: “Because of its huge potential, angiogenesis has been a prime target for drugs development research over the past forty years.

“But despite an investment of around $4-5 billion by scientists and drugs companies around the world, they have yet to develop a drug that can effectively target, control and regulate the growth of blood vessels.

“The aim of our work here at Queen’s University is to unlock the potential of the natural world – in this case the secretions found on frog and toad skins – so as to alleviate human suffering. We are absolutely convinced that the natural world holds the solutions to many of our problems.

“We just need to pose the right questions to find them,” he added. “It would be a great shame to have something in nature that is potentially the wonder drug to treat cancer and not aim to do everything in our power to make it work.”