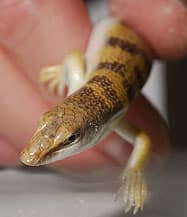 Study reveals how the sandfish lizard moves through sand.

A study published in the July 17 issue of the journal Science details how sandfish – small lizards with smooth scales – move rapidly underground through desert sand. Researchers from the Georgia Institute of Technology found that the lizards place their limbs against their sides and create a wave motion with their bodies to propel themselves through granular media.

"When started above the surface, the animals dive into the sand within a half second. Once below the surface, they no longer use their limbs for propulsion – instead, they move forward by propagating a traveling wave down their bodies like a snake," said study leader Daniel Goldman, an assistant professor in Georgia Tech's School of Physics.

The research team, consisting of Goldman and graduate students Ryan Maladen, Yang Ding and Chen Li, conducted controlled experiments with the sandfish using high-speed X-ray imaging to visualize sandfish burrowing into and through sand. The team used that information to develop a physics model of the lizard's locomotion.

The sandfish used in this study inhabits the Sahara desert in Africa and is approximately four inches long. It uses its long, wedge-shaped snout and countersunk lower jaw to rapidly bury into and swim within sand. The sandfish's body has flattened sides and is covered with smooth shiny scales, its legs are short and sturdy with long and flattened fringed toes and its tail tapers to a fine point.

In addition to having a biological impact, this study's results also have ecological significance, Goldman said. Understanding the mechanics of subsurface movement could reveal how the actions of small burrowing organisms like worms, scorpions, snakes and lizards can transform landscapes by their burrowing actions. This research may also help engineers build sandfish-like robots that can travel through complex environments.

"If something nasty was buried in unconsolidated material, such as rubble, debris or sand, and you wanted to find it, you would need a device that could scamper on the surface, but also swim underneath the surface," Goldman said. "Since our work aims to fundamentally understand how the best animals in nature move in these complex unstructured environments, it could be very valuable information for this type of research."