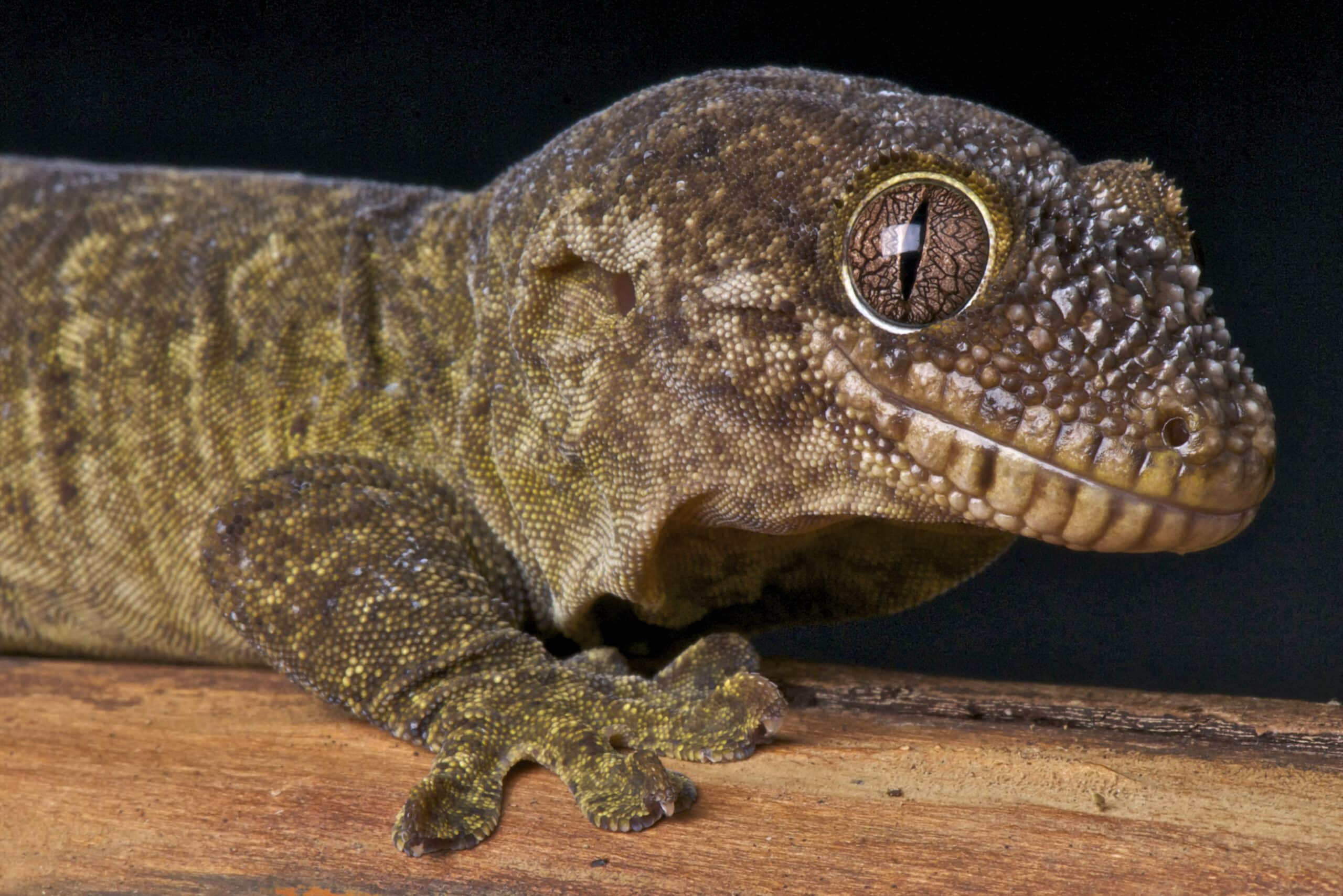 The Rhacodactylus genus is made up of six species, with the crested gecko (R. ciliatus) being the most recognizable. This genus also makes up some of the most unusual gecko species in existence, as well as the largest of gecko species and the largest live-bearing gecko species in the world. All Rhacodactylus species are found exclusively on the island chain of New Caledonia in the Coral Sea. New Caledonia is made up of two larger islands and includes a slew of smaller islands scattered around the various edges of these two land masses.

My personal experience with Rhacodactylus geckos goes back to 1997. After acquiring a group of crested geckos, I was hooked, and I had to seek out the other five species within this genus. I located my first pair of lesser rough-snouted geckos at a time when this species was not known to have been bred in the United States. The following year, I produced my first pair of offspring. I was fortunate enough to be one of the first people to produce this species in captivity, and I have bred these geckos consistently every year since.What makes the rough-snouted gecko unique within the reptile world is the fact that they are live-bearing geckos. This means that offspring are “born” fully formed, basically miniature versions of their adult counterparts. Live-bearing geckos are only found in two places in the world, New Zealand and New Caledonia, both of which may have been connected via a land bridge in the past.

Years later, I had the privilege of meeting Frank Fast, and I was able to purchase several greater rough-snouted geckos from the offspring that Frank had produced from adult animals he had collected on Grand Terra. Although the lesser rough-snouted gecko is represented in captivity in larger numbers than its bigger cousin the greater, it is the rarest form of Rhacodactylus in the world. The only reason greaters are less represented in captivity is due to the fact that far fewer have been collected in the wild.

Both subspecies of rough-snouted geckos make great pets, and their husbandry and care is very similar to that of other Rhacodactylus species, making them easy to maintain for beginners as well as interesting for expert geckokeepers. Both subspecies are considered rare, and their numbers will probably always remain low in captivity due to the fact that they require three to five years to reach maturity, and they give birth once a year to produce a maximum of only two babies, usually in the fall.

Rough-snouted geckos can live peacefully together with multiple males, provided the males were raised together from infancy. Males introduced as adults will most likely fight to the death. Females can live together peacefully in larger groups, but they should be introduced to each other with care if not introduced as babies. All new introductions must be done in a neutral territory, preferably in a new cage that has never housed any other geckos of this species prior to its use.

The best cage setup for both subspecies of rough-snouted geckos is one that is vertically oriented and a minimum of 36 inches tall, 18 inches wide and 18 inches deep. This will house one to four animals. Place a large hollow cork tube vertically in the cage to give the geckos a basking platform at the top of the terrarium under the basking and ultraviolet light. This is critical for gravid females. The bark also allows the geckos to perch on the side facing up or down against the cork bark, which is their natural position when resting outside of their hide. This is to allow the gravid female to control the temperature of the incubating babies within her. A number of hollow cork tubes need to be made available for daytime resting areas, as well as locations where female rough-snouted geckos can give birth. The tubes are hollow and empty, with one end firmly closed off by being grounded to either the floor or the side of the terrarium. I like having at least one smaller cork tube for each animal in the cage to offer individual privacy. These geckos are very social, but this allows for individual privacy, which is very important when breeding these animals. Pregnant females will retreat to these isolated locations prior to giving birth, and you will usually hear them “chirping” and “growling” to let the other geckos within their enclosure know that they are not interested in being disturbed.i

I also include a live plant within the rough-snouted gecko enclosure to enhance the natural environment and add humidity to the enclosure. A water bowl that is about 8 inches across and at least a couple of inches deep provides plenty of room for the geckos to soak if they choose to do so.

The temperature range of R. trachyrhynchus is basically the same as other Rhacodactylus species, which is between 65 and 85 degrees Fahrenheit, with daytime ambient temperatures reaching at least to the low 70s. Humidity for the rough-snouted gecko should be between 65 to 70 percent.

I use fluorescent UVB bulbs as well as a 60-watt basking light with my breeder Rhacodactylus. I have my lights on timers, and I keep them 12 hours on and 12 hours off.

I firmly believe that every Rhacodactylus species does a certain amount of basking in direct sunlight in the wild. The use of a good calcium supplement with vitamin D3 added is also used with every live food introduction. Both subspecies of rough-snouted gecko will eat gut-loaded and dusted crickets, as well as a dry pollen and nectar diet designed for day geckos. I have the dry arboreal gecko/day gecko food available all the time. Once a week, I introduce four adult gut-loaded and calcium-D3-dusted crickets per adult lesser, and five adult gut-loaded and calcium-D3-dusted crickets per adult greater. The greaters will also take pinky mice every so often, and I will offer the pinkies every two weeks. They usually only eat one at a sitting, and at times they will butcher the pinky without eating it. Pinkies are fed live to satisfy the desire to pounce on something moving, as well as to give the other cagemates, especially other male cagemates, a weighty meal. I like having pinky mice regularly available for the males when the birth is imminent to prevent any interest in a wriggling new baby gecko. Once they have eaten their fill, they tend to ignore any activity of live feeder items. Feeding is done in the evening when the lights are out, because they will not come out and engage in normal activity until there is total darkness.

Rough-snouted gecko breeding takes place anywhere between January and April, with most breeding activity happening in March. Breeding groups are kept together year-round to eliminate any chance of problems with re-introduction. The gestation period (pregnancy) lasts approximately six months, and these geckos usually produce twins. My experience is that they produce babies once a year. All my Rhacodactylus geckos go through a cool-down period during the winter months, when they slow down on their food consumption and slow down their activity period. I allow the cool-down period to happen based on the natural changes in the seasons, never letting the temperature fall below 65 degrees by night and 74 degrees by day. The ambient room temperature and humidity are thermostatically and humidistatically controlled for permissible highs and lows, but I do not allow the temperature and humidity to fall outside the parameters that I have set. In the summer, I do not let the high temperature of the breeding room exceed 78 degrees day or night. My gecko room is on a reverse-light cycle, which helps keep temperatures more mild during the summer months.

Rough-snouted geckos are only active in pitch darkness, so as mentioned earlier, you will need to make sure that the lights have been out for a little while before expecting to see any sort of normal nocturnal activity. They do breed at night, but it is very rarely observed. They also give birth at night.

Due to the high monetary value of the rough-snouted gecko, I remove the offspring as soon as they are discovered. I have unfortunately experienced cannibalism of babies by other cagemates in the past, so I do not take any chances. I set up young rough-snouted geckos in medium-sized Kritter Keepers, which measure 12 inches long, 7 inches wide (tapering in the back to 6 inches) and 8 inches tall. They are plastic tanks with plastic grated tops for ventilation and are not arboreal style. I add about an inch and a half of clean, sterilized soil, a couple of clean branches, a slab of cork bark for a hide, a handful of sphagnum moss for them to hide in and help maintain some humidity, and a small ceramic water bowl no larger than about two inches wide and an inch deep. This bowl also provides them with a place to soak, as they are sometimes inclined to do. I use a “cricket saver” in the bowl to prevent their live food from drowning. Cricket savers are plastic bio-balls used in the aquarium fish industry within wet-dry filters as a medium to hold beneficial bacteria, but they can be floated in a water bowl for reptiles as a life preserver to prevent crickets from drowning.

Baby rough-snouted geckos are fed similar to the adults, using smaller crickets, which are no larger than the width of a baby’s head. After one week, the first food offered to newborn babies is two-week-old, gut-loaded and calcium-D3-dusted crickets. I also have a small bowl of dry day gecko food available for them to feed on at their leisure. I do not feed fruit puree or “baby food” to my baby geckos, and I would strongly advise against it, due to the risk of metabolic problems when eaten exclusively.

With regular handling, both subspecies of rough-snouted geckos tame down and become as easy to handle as a crested gecko. Rough-snouted geckos come in a variety of colors and patterns, such as a mixture of varying degrees of green, yellow, cinnamon, gray, black, white, chocolate brown and Dalmatian spotting. Pattern variations include spotted, barred, patternless, and many combinations in between. They are well worth the investment, and they are a great addition to any gecko collection. However, be aware that their purchase price might be a little steep for some, often starting in the four-figure level, if you can find any available.