An injured crocodile was taken to surgery, and about four hours, four plates and 41 stainless steel screws later, “RoboCroc,” was reborn.

I was about to write my monthly REPTILES magazine Vet Q&A column when an emergency call came from Dr. Chris Miller, a Miami Metrozoo veterinarian. A car had hit a 10-foot-long bull American crocodile (Crocodylus acutus) on the infamous two-lane highway connecting the southern tip of Florida to the Florida Keys. The 18-mile stretch of road where the animal was found crosses the Everglades and is frequented by a myriad of wildlife. Extensive roadwork has forced may of these animals to cross the road in areas of high traffic. Sadly, vehicle-animal confrontations are all too common. Florida Fish and Wildlife had picked up the comatose croc just north of Key Largo and taken it to the zoo for temporary housing and veterinary care. 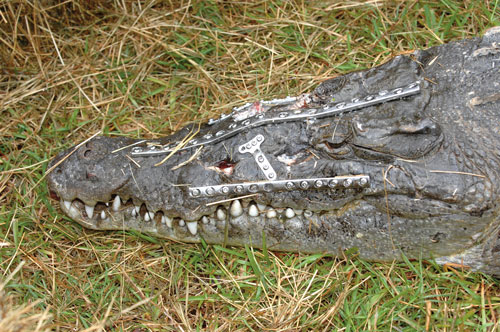 The day after surgery, RoboCroc opened his mouth.

My associate, Dr. Jennifer Regis, and I examined the croc. He had suffered severe damage to the face. His nose had essentially been broken off from the eyes forward. Only the hard palate on the roof of the mouth held the nose on. The good news was that the animal’s nose had enough blood supply left that there was still a chance we could save it.

The croc was anesthetized and taken to surgery. About four hours, four plates and 41 stainless steel screws later, “RoboCroc,” as a Metrozoo employee dubbed him, was reborn. The following day his prognosis looked good when he opened his mouth and gave a threat display to the media gathered around to observe him.

Sadly, despite these efforts to save his life, the croc died just two weeks later. A necropsy showed that he had injuries that were just too severe to pull through despite the heroic efforts of Metrozoo staff.