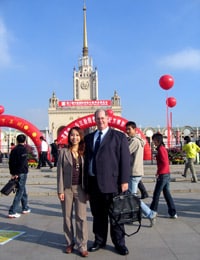 The Global Pet Expo in Orlando showcased many reptile products.

While reptile hobbyists may get to enjoy the many open-to-the-public reptile expos that surface around the country, only industry people generally get to experience the awe and majesty of a full-blown pet industry trade show. These are generally very large events with a lot of hoopla attached, with all the major pet product manufacturers participating, across all the pet categories. Dog, cat, fish, reptile, bird, gerbil, hamster, mouse, ferret … you name the pet and you will likely find at least one booth devoted to it at a big trade show, and possibly several booths – or even several rows of booths.

Trade shows are huge events, with many thousands of attendees, hundreds of vendors and much hustle and bustle. It’s not uncommon to see news crews filming at them, or costumed mascots parading about (I saw The Fairly Oddparents at one; I think they were promoting a children’s aquarium line of products). Dogs and other animals may be on view, whether as brand representatives or during training demonstrations, fashion shows and whatnot. In addition to these, another sight you might witness at a trade show is a rare one of me wearing a suit and tie, perhaps with beads of sweat popping on my forehead. Despite this, I typically enjoy myself at them.

Editors will sometimes attend big pet trade shows to help support their advertising sales representatives, meeting advertisers and learning about their new products. It can be tiring walking up and down the huge convention center halls where the shows are held, especially in halls that have concrete floors without carpeting, and long days are the norm, but it can be fascinating and fun, too, especially, in my case, if there are a bunch of really cool new reptile products on view. And of course, I must admit, going out on client dinners has its benefits too. It can be fun getting to know other industry people during a casual dinner, and there’s the added benefit of dining on a sales rep’s expense account, which is about the only time I ever order dessert in a restaurant.

After years of attending U.S. trade shows, in the fall of 2006 I was informed I was being sent to one in Beijing. This was the CIPS show, which stands for China International Pet Show. I was sent to that one because of China’s large percentage of aquarium product manufacturers. It was while attending this show that I dined in a restaurant that had red-eared slider on the menu, which I touched upon in a previous blog about Asian turtle-eating proclivities. The CIPS show was much like a U.S. trade show, in that there were many booths with many products, including a huge assortment of fish products and tank after tank of bright red fish, because red is a lucky color in China. These included lots of red parrot fish, a somewhat controversial cichlid hybrid, which were displayed, as well as many cool arowana, known in China as dragon fish because they look kind of dragon-y and which could cost beaucoup bucks.

The primary difference between the CIPS and a U.S. trade show was I couldn’t understand anything anyone said without an interpreter. Luckily, I had one with me, in the form of Agnes Ho, a fellow BowTie employee who is based in Hong Kong. We were a bit of an odd couple because I stood out like a sore thumb at the show, and people would actually gawk at the large American as I walked by. I felt like Bigfoot in a suit, though maybe Buddha would be a more apt description. I say this only because one overly happy vendor at the Pearl Market referred to me as the Happy Buddha. I like to think she meant it in a nice way.

Sometimes Chinese people would ask permission to photograph me. This happened at the trade show a couple of times, but was more common in public places, such as Tiananmen Square, when a Chinese person would timidly approach me, holding up his camera and kind of gesturing at me with it. Sometimes they asked me to stand among their family members while they took a photo. I suspect most of these people were rural Chinese who did not often encounter Americans at all, let alone one that was 6 feet tall and weighed over 300 pounds. I was happy to oblige, and they always seemed very happy when I did. I can just imagine what they may have said back in their villages, brandishing a photo of me: “Get a load of THIS one! He’s the biggest one yet!” Maybe they traded such photos back and forth, like Pokemon cards.

Anyway, the reason I’m going on about trade shows is because a couple weeks ago, the huge Global Pet Expo was held in Orlando. And while I personally did not attend, some of BowTie’s other editors did, and they brought back photos. Check out the accompanying slideshow to see some of the reptile products that were featured at the show.