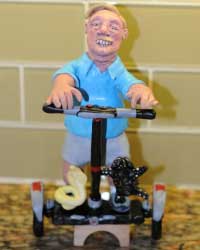 Reptile Figures Based On Reptile Icons

Every year, artist Russ Gurley creates an action figure based on someone in the reptile community.

Every year, Russ Gurley creates a comical “action figure” modeled after a prominent figure in the herpetological community. He donates the figures to the annual auction that takes place during the North American Reptile Breeders Conference (NARBC) held in Tinley Park, Ill., where they are sold to raise money for PIJAC and USARK. This year’s subject is Wayne Hill, the owner of the country’s largest reptile expo, the National Reptile Breeders' Expo, held in Daytona Beach, Fla., every August.

Like many, I get a kick out of Russ’ action figures, and I thought it would be fun to interview him about them. And don’t forget, if you want to bid on his latest one, the Wayne Hill figure will be on the auction block in Tinley Park this Saturday night (Oct. 9, 2010)! Be forewarned, though: As Russ reveals in the below interview, Bob Ashley will likely be bidding against you!

How did the idea for the figures come about?

It's a long, complicated story, but basically Mark O'Shea, who was the Special Guest at the early NARBC shows, was being teased by some of the guys because he was on TV with his nature programs but he had no action figures or coloring books or posters of him and his program. At the time, there were posters and action figures and tons of merchandise for Steve Irwin, the Crocodile Hunter. So, Jon Coote and I schemed the idea of taking a Crocodile Hunter action figure from Burger King and transforming it into Mark. When you wound up this little figure, it wiggled around hilariously on the back of a crocodile. I took the figure home and, using polymer clay, I added Mark's ginger curly hair and a small goatee, as well as a bit of length to the nose. Also, I added Mark's signature camouflage pants.

At the 2003 NARBC show in Tinley Park, we snuck the modified action figure into the auction items. Mark exploded with laughter when he saw it. To our surprise, there were lots of bidders, and the figure brought $700. Wow! We figured we were on to something, and from that time on, each year at the Tinley Park NARBC, I have presented a new action figure to auction. There is certainly no shortage of characters in our hobby to immortalize in these bizarre action figures!

So Mark O’Shea was first in 2003. Who else has been immortalized?

How long does it take to make one of the figures? Describe the process.

I have used a variety of techniques to produce these action figures. The first one was a modified Burger King action figure, and the next two were modified Simpsons figures. For Hank Molt, I used a figure of Mr. Smithers on a Hawaiian vacation and stuffed his duffel bag and suitcase full of snakes. For Bill Love, I used Comic Guy dressed as a superhero. I changed the paint scheme from green to blue and transformed Comic Guy into Bill Love as his superhero identity, The Blue Chameleon. The Blue Chameleon, wielding two digital cameras, is battling a huge crocodile as it bursts through the surface of the water.

For Kevin McCurley of NERD, I modified the figure of a heavy metal guitarist (I needed the crazy look on the face and the long, curly hair). I removed the guitar and added a ball python in his hands. At his feet, I added another dozen ball python morphs, all probably types that originated at Kevin's breeding facility. For Philippe de Vosjoli, I took a Homer Simpson figure and added Phil's ponytail and a pale-blue collared shirt. I filled the base of the figure with animals from Phil's long career in herpetoculture, including Argentine horned frogs, chameleons, treefrogs and succulent plants from around the world. This figure ended up being the most delicate because of all the leaves and frog parts. I had to do some repair work after the 12-hour drive from Oklahoma to Chicago for the 2007 show. Because of Philippe's reputation in our hobby, several buyers were excited by this figure and it sold for $1,500.

For Brian Potter, I transformed a Buzz Lightyear action figure into Super Stinky, a horrible superhero with a terrible crime-fighting weapon that I won’t describe in detail here. The figure included an all-brown, textured paint job, a pizza box and a fart button on the back. For the Don Hamper and Wayne Hill figures, I returned to my early days of sculpting and molded both figures entirely from raw clay instead of taking an existing action figure and modifying it. With this technique, I had to move from more of a caricature and cartoony figure to one with more identifiable features. These two figures are not spot on, but they do capture the “originals'” personalities and features. They seem to work and are well-received by my friends in the reptile community.

I use Sculpey, a polymer modeling clay that I have used since I was a kid, molding dinosaurs, reptiles, serial killers and other figures. My tools include an X-acto knife, a round toothpick and the tip of a No. 2 pencil. I have used dental tools and fancy art tools in the past, but I get what I need with these three simple items, and I can always find them when I need them!

I have been lucky so far and have not had any "artist’s block" with any of these figures. I don't fret over them too much, and I can usually sculpt one in a couple of hours while sitting around, watching TV with my family. I then cook the clay in the oven for 20 to 30 minutes, let it cool and then spend a couple of days working on the paint job. I usually paint a base coat on the figure and then slowly build up colors and wrinkles, shadows, etc. I have transported figures with the paint still wet, which is not fun, so I try to finish them at least a week before the show, just in case I need to do any last-minute touch ups. I transport the figure to Tinley Park in a box full of shredded paper or cotton, and I always bring some paint, a hot glue gun and some clay in case something bad happens during the journey.

What has the reaction generally been from your models?

I am nervous every year when presenting these figures! All of them are modeled after people who are very good friends of mine, some for more than 20 years. Imagine me taking a Homer Simpson figure and creating Philippe de Vosjoli! Phil is a great friend, mentor and the godfather of our hobby – he literally invented herpetoculture! – and here I am saying, "Dear friend, here you are as a knock-off of Homer Simpson. DOH!" In fact, the person who bought the Philippe figure gave it to him as a gift. Philippe didn't want to fly home holding his figure in his lap, so he asked me to take it. I am pretty sure it was because he thought it was too delicate to travel with, but it might have been to avoid strange looks from fellow passengers.

I was also anxious when I showed up at last year's show with the Don Hamper figure. It depicted my good friend Don in a jail jumpsuit, and I was afraid he and his wife, Robbie, wouldn't think it was funny. Happily, as everyone assured me in the weeks before, Don and Robbie howled with laughter when they saw the figure. They absolutely loved it, and it made me very proud.

Everyone who has been depicted seems to have been really pleased and proud. Of course, they can't really scream, "How dare you! I hate you for making me look like Homer Simpson!" I think that most people at the show realize that we've managed to generate about $10,000 for USARK and PIJAC with these figures. I am certain that these organizations have appreciated the figures and the money they have generated.

What is the most one has sold for at auction?

Bob Ashley [co-owner of the NARBC shows and ECO Industries] wants to buy every figure and display them in a beautiful display cabinet at his Chiricahua Desert Museum in Portal, Ariz. Everyone at the auctions knows he wants them, so several of his friends will usually bid aggressively to drive their price up, knowing that Bob won't back down because he wants the entire collection. But, hey, it's for a good cause, right?

One figure was a great surprise for me. At the Dallas NARBC show in 2008, my friend, artist Tell Hicks, sculpted a figure of me! It, too, was created from polymer clay, and it had me sitting in a pool of water and water lilies, holding a book that was transformed into a turtle, in honor of my writing and love of turtles. It was purchased for $1,500 by Todd Goodman of Timberline Industries, one of the largest supporters of our hobby. After the auction, Todd gave the figure to me. What a great surprise! I proudly displayed it in my home until 2009, when I gave it to Bob Ashley to display along with the others at the museum. I felt like it needed to be there with them.

Describe some of your other herpetological creative efforts.

I earned a BFA in Fine Art/Illustration from Oklahoma State University and have been an active artist most of my life. I am also a painter, and I donate wildlife paintings to charity each year. I just moved my animals into a new breeding facility, and I have painted the entire concrete floor with an Aboriginal design that includes turtles, stingrays, barramundi, yabbies and other aquatic creatures. It has been a long, tedious process, but I am happy with the way it is developing and I hope to have the floor finished by the end of 2010. I also own a small publishing company, LIVING ART publishing, so I get to be creative almost every day as I lay out books, as well as freelance for ECO, Zoo Book Sales and others. I also produce articles, fliers and posters for my business and my other passion, the Turtle and Tortoise Preservation Group (www.ttpg.org).