Pollution May Be Linked To Sea Turtle Disease

A new study links pollution to a tumor-forming disease in green sea turtles.

Fibropapillomatosis, a tumor-forming disease related to the herpes virus, is afflicting green sea turtles (Chelonia mydas), and it may be related to pollution, according to a study published in PLOS One, a peer-reviewed science journal. Study authors analyzed the records of 3,939 stranded Hawaiian green sea turtles over 28 years. 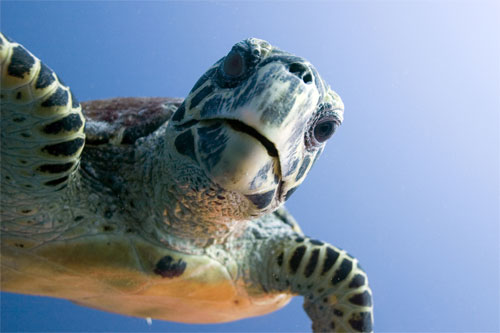 A new study has found a correlation between pollution and a tumor-causing disease afflicting green sea turtles.

The tumors caused by fibropapillomatosis are benign, but the large masses that form in areas such as the green sea turtle's eyes, joints and mouth can impair function and often lead to death.

The study found that 1) turtle size is a consistent risk factor for fibropapillomatosis; 2) the disease peaked in some areas in the 1990s, has remained constant in some areas, and rates of the disease have increased elsewhere; and 3) onshore land use where the green sea turtles feed may play a role.

The study found that higher rates of the disease were clustered in watersheds — areas that drain into bodies of water — with high nitrogen footprints. The study examined several watersheds in Hawaii, including sewage injection wells, urban centers, poultry and hog farms, and boat harbors. The study found that the nitrogen runoff created by these watersheds may be contributing to the growth of an invasive macroalgae in areas where the green sea turtles feed. The invasive macroalgae, which the turtles feed on, likely sequesters environmental nitrogen as the amino acid arginine. Arginine is known to regulate herpes viruses and contribute to tumor formation.

The study concludes that environmental factors are significant in promoting fibropapillomatosis and that coastal ecosystems rich in nutrients that cause excessive algae growth may promote herpes virus infections in herbivores.