Supplement to the October 2008 REPTILES magazine article "Strength in Numbers."

Baby Paroedura pictus are tiny! But in spite of their minute size, any diligent geckokeeper can easily raise this species often referred to as just “pictus.”

There are two essentials: a good diet and proper hydration. Keep these geckos well-fed with calcium-dusted insect prey. Supply water in very shallow water dishes to prevent them from drowning. Because the water in these dishes will likely evaporate often, keep humidity up with light misting at least twice a day. 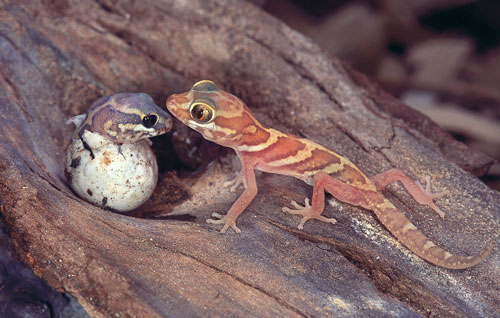 Despite its tiny size, Paroedura pictus is easy to raise as long as geckokeepers are diligent.

This is important because baby pictus geckos grow rapidly and therefore shed often. Poor sheds result in the loss of digits. They also might make individuals refuse food, and they starve to death in a very short time. Fortunately, this is preventable, and these little guys thrive in captivity with conscientious care. They can grow into adults in less than a year.

A ground covering of paper towels works best because geckokeepers can easily monitor activities such as feeding and defecation. Keeping four or five juveniles together for a period of time is fine, but watch for aggression. Separate geckos as size differences become apparent.

Like most lizards, male and female juveniles of this species are impossible to differentiate from one another. Unlike some other geckos, incubation temperature does not influence the sex ratio in hatchlings.

Want to read the full story? Pick up the October 2008 issue of REPTILES, or subscribe to get 12 months of articles just like this.