The Board of the 32nd International Herpetological Symposium announced that Wayne Hill is the recipient of the Joseph Laszlo Memorial Award.

The Board of the 32nd International Herpetological Symposium (IHS) announced that Wayne Hill of Winter Haven, Florida is the recipient of the Joseph Laszlo Memorial Award. 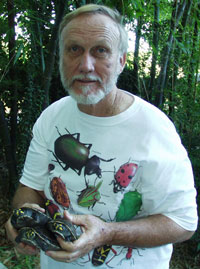 The Joseph Laszlo Memorial Award is presented to the speaker at the annual IHS meeting who has demonstrated that his or her work represents new and exciting views and advances in herpetology and herpetoculture.

Hill’s presentation, “Solving Problems in Breeding Rare Turtles”, was given to an audience at the 32nd International Herpetological Symposium. The attendees were herpetoculturists, zoo keepers, university professors and students, researchers, and others interested in the field of herpetology from around the world.

Laszlo, long-term Superintendent of the Department of Reptiles at the San Antonio Zoo, San Antonio, Texas, died on November 14, 1987. In recognition of his lifelong achievements in and contributions to herpetology, especially in herpetoculture, the IHS has bestowed an annual award in his name.

Hill’s talk exemplified the many innovations that Laszlo created in his career as a keeper and breeder of rare reptiles. His talk included many inventive approaches to solving the problems keepers across the United States are having in breeding threatened and endangered turtle species in captivity.

Hill, like Laszlo, has been a trendsetter, being the first keeper in the United States to breed albino cobras, the first to breed all three species of rare hog-nosed snakes from Madagascar, and he currently keeps and breeds a large number of rare turtle and tortoises species at his breeding facility in Winter Haven. Hill is also the director of the largest reptile and amphibian trade show, the National Reptile Breeders Expo, held in Daytona Beach, Florida each August, and authored the September 2005 REPTILES article “The Asian Turtle Consortium.”