Passengers on a Qantas Air flight from Cairns, Australia to Papua New Guinea screened their own version of "Snakes on a Plane" when, 20 minutes into their flight, a passenger pointed out to the cabin crew that there was a snake on the wing of the plane. And sure enough, when the other passengers and crew took a look, they saw what University of Sydney snake expert Rick Shine would later identify as a scrub python, struggling to survive its high altitude ordeal.

Below is a Youtube video of the snake in flight but be warned, some of the imagery may not be suitable for all viewers.

"There's no way it could be anything else,"  Shine told the Sydney Morning Herald. "They're common in north Queensland. They're ambush predators and if there are rodents anywhere nearby, they'll most likely be in the vicinity. They often find their way into tight ceiling spaces in houses, although I've never heard of one on a plane until now."

How the python was able to climb onto and under the wing of the plane is anyone's guess, but it spent the better part of the flight struggling to maintain its grip in minus 12 degree Celsius temperatures and 248mph winds. According to passenger Robert Weber, the snake was able to pull itself to safety under the wing several times only to be dragged out again by the wind. By the time the plane landed in Port Moresby, the snake had succumbed to the battering it took on the wing of the plane.

"I felt quite sad for it, really. For the remainder of the flight, he was trying to pull himself back into the plane, even though he was fighting against 400km/h winds. The cabin crew told us that at cruising altitude, it was minus 12 degrees outside – but not even that was able to finish him."

The scrub python (Morelia amethistina) is the longest native snake in Australia. Its average length is between 6 and 13 feet and can weigh up to 33 pounds. It can be found in northern Australia and Papua New Guinea as well as in Indonesia. In the wild, the scrub python feeds on birds, rodents, and other small mammals. 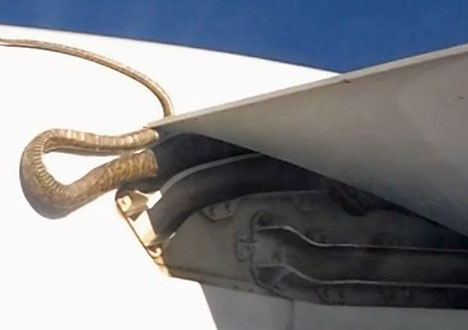 Snake on a plane