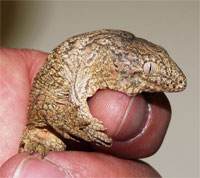 A hobbyist says he just witnessed his second and third case of parthenogenesis in New Caledonian giant geckos.

Green Geckos Benefit From Soft Penned Release In New Zealand
Grand Cayman Blue Iguana Comes Back From The Brink Of Extinction
Why No Whiptail Lizards?

Hobbyist Thomas Favazza of Macomb County, Mich., said that on Nov. 27 and Nov. 29, he witnessed his second and third case of virgin birth from his pair of Nuu Ana New Caledonian giant geckos (Rhacodactylus leachianus henkeli). In a process known as parthenogenesis, females ovulate and produce offspring without fertilization from a male. Parthenogenesis is rare in vertebrates and has not been officially recorded in Rhacodactylus species.

Favazza purchased his pair of female R. l. henkeli, which he houses together, from giant gecko expert Philippe de Vosjoli in 2006. Favazza said that after both of the geckos started producing eggs with fully or partially developed embryos, he sent photos to de Vosjoli to see if he thought both Nuu Ana geckos were female and that de Vosjoli thought they were. Favazza said the pair of Nuu Anas has never had contact with other animals.

To date, Favazza said the geckos have produced about 15 embryos from 18 clutches, and he has other clutches incubating. Favazza believes that both of the geckos are capable of parthenogenesis because the number of days between clutches is too small for them to have come from the same gecko. The Nov. 27 and Nov. 29 hatchlings, for example, came from separate clutches that were laid 11 days apart. "The normal period between clutches is usually between 5 and 7 weeks," Favazza said.

Favazza said that on July 7, 2009, the first live hatchling was produced from a clutch laid by one of his female Nuu Ana New Caledonian giant geckos. He named the first hatchling R. McCoy (as in real McCoy) and believes she is likely to start laying clutches when she reaches 2 years of age, about 8 months from now.

Since Favazza first reported his pair of parthenogenetic Nuu Anas, there have been some skeptics. Offspring produced by parthenogenesis are genetically identical to their mothers, and Favazza has looked in to DNA testing. However, he said the process is more expensive and extensive than is plausible for him at this time. "I am satisfied with my proof, but some people are not," he said. "I believe that the same results will occur within other hobbyists' collections and will eventually lead parthenogenesis in Nuu Anas to be accepted."

Favazza is hoping for even more parthenogenetically produced offspring in the future. He said many of the embryos that have not survived seemed to have outgrown their eggshells. To improve their chances, he has experimented with different incubation temperatures and mediums. "I believe the higher temperatures allowed these embryos to develop faster, thus hatching out smaller rather than outgrowing their egg shells," Favazza said of the Nov. 27 and Nov. 29 hatchlings.