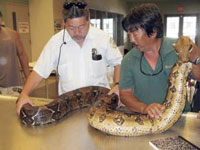 A group of hunters out for a 4th of July hunt targeting pigs near O'ahu, Hawaii's Waiawa Correctional Facility in Honolulu captured a boa constrictor

A group of hunters out for a 4th of July hunt targeting pigs near O’ahu, Hawaii’s Waiawa Correctional Facility in Honolulu captured a boa constrictor (Boa constrictor) that measured more than nine feet in length, according to a report in the Honolulu Star Advertiser. The hunters, according to the report, saw the snake crawling along a dirt road and captured it. They then called an official with the state’s Department of Land and Natural Resources, who took the animal to the Honolulu Zoo where it was put on a scale and weighed in at 57 pounds. 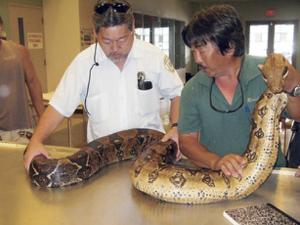 Officials with the Hawaii state Department of Agriculture handle a 9 ft. boa constrictor captured by pig hunters in Waipahu, Hawaii.

“It’s hard to say if there are more of these out there. We may have to go back to the area and look around,” Keevin Minami, land vertebrate specialist for the Hawaii State Department of Agriculture told the Star Advertiser. “It’s very irresponsible that someone would release this into the wild,” he said. “Any time we find something like this in the wild, it’s not good news.” While there is no indication the snake reproduced, the state may  X-ray the animal to determine if it did, Minami said.

The snake is now in quarantine. According to the report, the boa constrictor is the third snake found on Oahu this year. A four foot blackrat snake (pantherophis obsoletus) was found on a concrete barrier on a road and a five foot boa constrictor was found in a fire damaged home in the Alewa Heights neighborhood above Nu‘uanu Valley.

“I think this species, and others like it, could survive and breed in Hawaii.  There is only one native mammal (a bat), but we have a diverse bird fauna, both native and introduced, whose nests would be very vulnerable,” said Dr. Brian Bowen, associate researcher at the Hawaiian Institute of Marine Biology and member of the American Society of Ichthyologists and Herpetologists. “In addition, many of the introduced mammals have become accommodated to Hawaiian habitat over the decades and centuries, like the pigs that arrived with the Polynesians.  These would also likely be vulnerable.”

“For the wildlife managers of Hawaii, snakes like this 9 foot boa are the ultimate nightmare,” Bowen told ReptilesMagazine.com. “We are well aware of what happened in Guam when the brown tree snake was introduced; it ate everything that could walk, crawl, or fly, and some native species exist now only on outlying islands.  Hawaii’s native fauna is already battered by introduced competitors, introduced diseases, and loss of habitat.  A predatory snake could push some of these species to extinction. The native birds are especially vulnerable, because they have no experience with snakes, and therefore no defenses.”

“One of the scariest aspects of snakes as invasive species is that females don’t always need a mate to start a family.  A variety of snakes have been shown to reproduce by parthenogenesis, when the female just copies her own genetic material and bears young,” Bowen said.” “The introduction of just one female could start an ecological disaster.”

There are no native snakes on any of the islands in the Hawaiian chain. Most snakes that do end up in the state are caught at the airport, including several instances where brown tree snakes (Boiga irregularis) have been captured on flights that originated in Guam. The boa constrictor is native to northern Mexico and much of Central and South America. The species can grow to more than 10 feet in length in captivity.