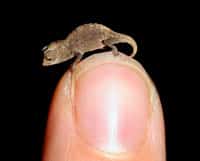 Brookesia micra ranks as one of the smallest four limbed animals in the world.

How Do Crocodilians Eat Animals Whole?
Dunes Sagebrush Lizard Will Not Be Listed As An Endangered Species
These Lace Monitors Battle For Supremacy

A dwarf chameleon species has been discovered in Madagascar that is so tiny that a juvenile Brookesia micra can walk on the nail of an adult human fingertip. Scientific researchers Frank Glaw, Jörn Köhler, Ted M. Townsend, and Miguel Vences discovered the chameleon, (Brookesia micra), while searching through leaf litter on the islet of Nosy Hara. In all, four species of leaf chameleon were detailed in the paper "Rivaling the World's Smallest Reptiles: Discovery of Miniaturized and Microendemic New Species of Leaf Chameleons (Brookesia) from Northern Madagascar" published by PLoS One; Brookesia tristis, Brookesia confidens, Brookesia micra, and Brookesia desperata.

The species were collected between the years 2000 and 2008 in the Montagne des Français, Ankarana, Nosy Hara and Forêt d'Ambre regions of Madagascar, and each species shows clear differences in nuclear and mitochondrial DNA sequences that separates the species, with an extremely high genetic difference that the scientists say indicates a very old lineage divergence. 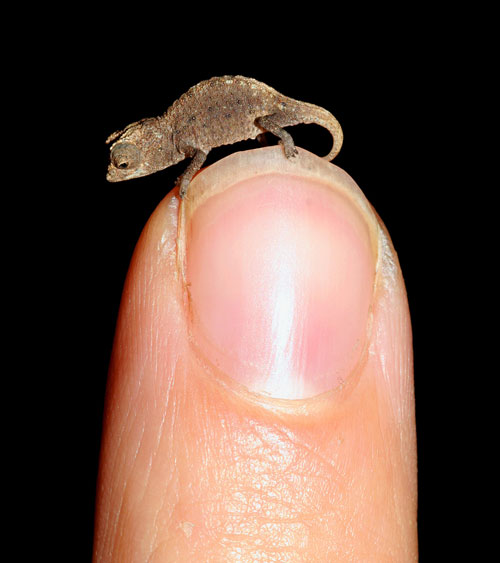 According to the researchers, Brookesia micra reaches a maximum size of 16mm (slightly more than half an inch) in males, not including the tail and 30mm (1.1 inches) total length for both male and female, which ranks it as one of the smallest four-limbed animals in the world.

The researchers collected the slightly larger Brookesia tristis, Brookesia confidens, and Brookesia desperata species in the rainforests and dry forests of northern Madagascar at night and during the rainy season, using torches and headlamps. Brookesia micra were found to be active during the day on the ground in an area of eroded limestone boulders and dry forest leaf litter. It was also found at night roosting on branches in very low vegetation areas. The research paper details the genetic and physical makeup of each species and suggests that geographical disparity can cause "island dwarfism" and may have contributed to the extreme miniaturization of Brookesia micra, though it is uncertain.

The complete research paper can be found on the PLoS website