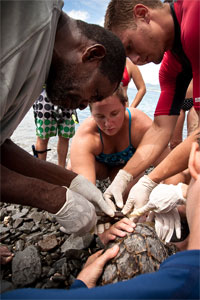 New Program To Save Sea Turtles

A new capture-and-release program in the Caribbean aims to save sea turtles.

A new sea turtle capture-and-release program for the fishing industry has been established in St. Kitts. The program aims to reduce the number of sea turtles caught and sold in the Caribbean area.

About 70 percent of Caribbean nations have banned fishing of sea turtles because of their classification as an endangered species, according to Ross University School of Veterinary Medicine, which is helping lead the program. However, St. Kitts as well as Nevis continue to allow such fishing, although certain regulations have been implemented.

The team met in early October at Ballast Bay on St. Kitts’ south peninsula to teach Theophilus Taylor, president of the local Sandy Point Fishermen’s Cooperative, the appropriate method of tagging a hawksbill turtle (Eretmochelys imbricata), the main species of sea turtle captured on the island.

“As president of the Sandy Point Fishermen’s Society, it is important to be a part of the sea turtle preservation project,” Taylor said. “I realize that many of us [St. Kitts/Nevis fishermen] fish for the sea turtles because it is how we keep our families going, it is our livelihood, but we have to think about how these turtles will affect the future of our island’s sea life.”

By mid October, Dr. Stewart and Taylor were presenting the program to the local schools. Taylor said his focus is on teaching the children why the turtles are important to St. Kitts and encouraging them to observe turtle friendly recreational activities to avoid damage to nesting and foraging turtles as well as incubating nests.

The two plan to present the program to more than 30 schools throughout the next five months. The St. Kitts Sea Turtle Monitoring Network, Georgia Sea Turtle Center, Ross University School of Veterinary Medicine and St. Kitts Fisheries Department are providing nonconsumable sources of income — getting paid to work for conservation as opposed to harvesting turtles — to those participating in the capture, tagging and release. Sea turtle education programs will also be implemented.