Hobbyists say they might have stumbled upon parthenogenesis in Rhacodactylus leachianus.

Sometime between Dec. 28, 2008, and Jan. 4, 2009, a New Caledonian giant gecko (Rhacodactylus leachianus henkeli) crawled out of its eggshell and entered the world like so many others of its species. But unlike them, this gecko might not have a father. Anders, a private hobbyist living in Rockport, Texas, said its mother has never been with a male. He believes he might have witnessed the virgin birth of a leachie. 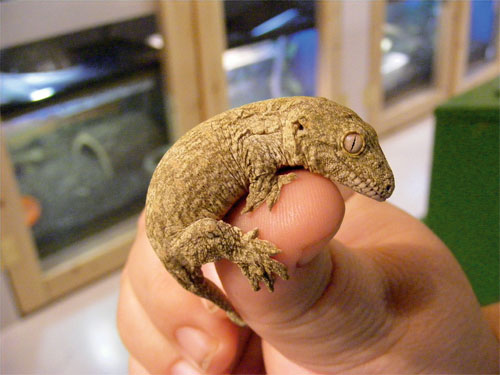 Did Jessie the New Caledonian giant gecko hatch from an unfertilized egg?

When eggs develop without fertilization, science calls it "parthenogenesis." Although rare in vertebrates, some reptiles, such as some whiptail lizards, some microteiids and some geckos, are capable of it. To date, no Rhacodactylus species has been recorded as parthenogenetic. Anders' miracle baby, Jessie, seems to offer evidence that some R. leachianus females, under certain circumstances, may have the ability to produce viable eggs without male fertilization.

Anders' friend Joseph Bowen, also from Rockport, Texas, bought Jessie's mother. The moss-green hatchling with white blotches came with another New Caledonian giant gecko hatchling, and Bowen set them up in an enclosure. He bought the two geckos as a male-female pair, he said, but later the breeder sexed them both as female.

Although Bowen doesn't remember exactly when it happened, one day he found the other leachie wounded in the cage. "It looked like something mangled it pretty good," he said. It died shortly thereafter. From then on, he said, the last remaining New Caledonian giant gecko in his possession lived alone.

In November 2006 he asked Anders to watch the subadult gecko. Too much was going on at home, he said, and Anders, who works at a pet store and breeds other Rhacodactylus species, had the time and know-how to help. Wanting a leachie for some time, Anders agreed. She was about 8 or 9 months old when he got her, Anders said, and her solitude continued. "She has never been with another adult gecko namely because I can't afford one," he said.

Several months later the New Caledonian giant gecko started laying two-egg clutches. Anders said often one quickly went bad, but the other stayed firm and white. Many geckokeepers would have tossed eggs known to be unfertilized, but he had different plans. "I knew other species of reptiles were capable of parthenogenesis, so I set the eggs up to hatch," he said. Besides, he had nothing to lose. "It was more wishful thinking than luck," he said.

Anders took the good leachie eggs, placed them in leftover earthworm deli cups with vermiculite, and incubated them at room temperature. He said he waited more than 70 days and then opened the eggs, but he found them empty. Several times he tried. All ended in failure — until Jessie came along.

Waiting for a Miracle

Several states to the north, another private hobbyist in Macomb County, Mich., is still waiting for a "miracle baby." Thomas Favazza has a pair of Nuu Ana females (R. l. henkeli), and he said these New Caledonian giant geckos have laid clutches with some eggs producing partially or fully developed embryos since the winter of 2008. A live hatchling has yet to emerge. Update>>

Favazza bought his Nuu Anas from leachie specialist Philippe de Vosjoli in January 2006. Notations on their containers indicated they hatched in September 2005, Favazza said, and they had been incubated at temperatures most likely to produce females. He set up the geckos in a terrarium. Although he owns other New Caledonian giant geckos, he said his Nuu Anas have never had contact with other animals, even during maintenance, since they arrived in his collection.

In February 2008 Favazza started noticing eggs in the Nuu Ana enclosure. Thinking he might have a male-female pair, he decided to incubate them at 79 degrees Fahrenheit. Most of these two-egg clutches were infertile, he said, but then one clutch laid around August 2008 contained two fertile eggs.

Favazza noted his findings. "One egg was opened prematurely on Nov. 22, 2008, and had a developed embryo with partially developed eyes and a beating heart outside the body cavity," he wrote. "The other was left incubating until Jan. 8, 2009. Upon manually opening this egg, the embryo was fully developed and died in the egg due to overcalcification and other undetermined causes."

The eggs were slightly surprising to Favazza, but he thought that perhaps the geckos were just reaching maturity. Some R. leachianus breeders say New Caledonian giant geckos can become mature when lizards reach 2 to 4 years of age.

Then one clutch appeared in the leachie pair's enclosure on Jan. 17, 2009, and another appeared on Feb. 3, 2009. That really triggered Favazza's curiosity. "If only one was laying eggs, eggs wouldn't appear until five to seven weeks later," he said. "So only one female couldn't have laid the eggs of both clutches."

These events led Favazza to contact de Vosjoli in February 2009 to verify the sex of his now-adult geckos. "After sending two sets of photos showing the pre- and post-anal areas, he stated that they appear to be females," Favazza said. He also showed photos to Rhacodactylus gecko breeder Matt Parks of Pangea. Although Parks said he has limited experience sexing R. leachianus, he also thought the Nuu Anas were female.

As of June 2009 Favazza said his Nuu Anas have produced nine clutches, all with two eggs apiece, and five eggs have produced embryos in different states of development. He has photographed four and frozen them in his freezer for future tests. He believes the evidence he's gathered shows that the offspring are clones of the mother and perhaps one day might serve a grander purpose. "It is my hope that this study will help us understand the complexity of leachianus geckos," he said. "I also feel that this may also help identify legitimate claims of parthenogenesis in these geckos."

In the meantime Favazza continues to incubate eggs in the hopes one will yield a live gecko. Update>>

Reactions to the Oddities

Anders apparently knows what it's like when an egg hatches against the odds. In November 2008 the moss-green New Caledonian giant gecko in his care laid a clutch similar to the others. One egg quickly molded, and the other remained firm and white. Using a light to illuminate the inside of the egg, he saw a tiny pink spot with veins, he said. He set it up to incubate and checked it regularly. 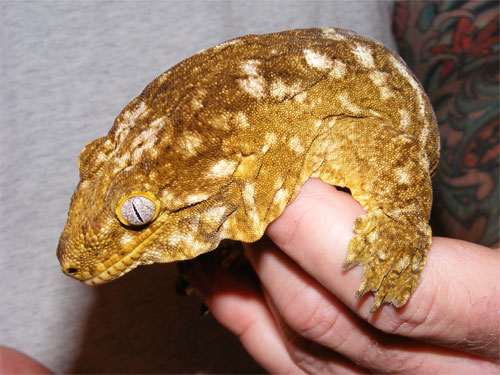 Then came Sunday, Jan. 4, 2009. "I realized I hadn't checked the egg in a week," Anders said. "I rushed to open the container and was absolutely shocked to see a baby gecko. I closed it in disbelief. I had recently hatched Halmahera geckos (Gehyra vorax) and thought I had confused an egg. I looked again, and it was in fact a New Caledonian gecko."

Anders hand-fed the roughly 2-inch-long hatchling a mix of baby food and leachie powdered diet for about a month. When he felt confident it would live, he told Bowen. "He looked at me with this blank stare on his face," Anders said. Bowen, too, remembers his surprise. "I couldn't believe him," he said.

Yet in late February 2009 Bowen announced the incident on the Repashy Reptiles forums. Some forum posters wondered whether the mother had been housed with a male even briefly, and Bowen wrote he was 100-percent certain she had not. Some suggested that DNA fingerprinting be performed on the geckos to determine whether they were genetically identical. None wrote that they were aware of documented cases of parthenogenesis in Rhacodactylus leachianus.

Bowen also called de Vosjoli for his opinion. Currently working on a book about R. leachianus, de Vosjoli said he has been following the subject since Favazza and Bowen contacted him. "The fact that we have not noticed this or that there are no other reports of parthenogenesis in R. leachianus does not mean that this is not possible," he said, "although I think we can state that this is definitely not the rule with this species."

Some nonparthenogenetic species occasionally produce an individual that is, de Vosjoli said. He pointed to a study published February 2003 in the journal Heredity to illustrate his point. The article describes a case in which a female Burmese python (Python molurus bivittatus) at the Artis Zoo in Amsterdam, The Netherlands, produced eggs with viable embryos for at least five years in a row. She was isolated from males the entire time. According to that study, genetic testing confirmed that the snake had reproduced parthenogenetically.

For now, de Vosjoli remains cautiously optimistic about what Bowen (and Anders) and Favazza have encountered. "Unless these two individuals are lying about the history of their animals, we have to assume that they are reporting likely cases of parthenogenesis," he said. "This should be further validated when the females lay more eggs that eventually hatch."

The scientific community is rarely satisfied with single examples, which usually leave too much unexplained or unaccounted for. Proving parthenogenesis in a species is no exception, and Bowen discovered that when he called the University of Texas at Austin and was forwarded to integrative biology professor David Crews. Although unfamiliar with Rhacodactylus leachianus specifically, Crews has studied lizard parthenogenesis for more than 30 years.

In other words, the New Caledonian giant gecko hatchling known as Jessie, by itself, appears to offer science little. Crews said genetically testing the young leachie might remove some variables, such as the possibility of fertilization through retained sperm, but such tests are often beyond the means of the average reptile hobbyist.

Anders might have a better case, Crews said, if a number of things fall into place. Jessie would have to be a female, be kept isolated and produce an egg that hatches. If that hatchling also is female, Anders could draw some blood or clip a nail, and get someone at a university to genetically type it. Perhaps then, Crews said, parthenogenesis could be proven.

And like de Vosjoli, Crews left that possibility open. He said a lack of documented cases of parthenogenesis in a lizard species, such as Rhacodactylus leachianus, doesn't mean it doesn't occur. "You have to keep an open mind."

Since laying the egg that produced Jessie, the moss-green R. leachianus female in Anders' care has laid four more two-egg clutches. One egg from the most recent clutch is firm and appears full, Anders said, but so far he hasn't seen anything when he candles it. All other eggs have spoiled.

Neither Anders nor Bowen plan to breed the New Caledonian giant gecko with a male for at least several years. "It would defeat the purpose of proving a virgin birth," Anders said. He also doesn't currently plan on breeding Jessie.

Whatever this leachie egg brings, or others bring after it, Anders is satisfied with Jessie for the time being. The 6-month-old gecko is his; Bowen gave it to him for his trouble. Measuring about 5 inches long from snout to tail tip, Jessie is now eating crickets and a leachie diet mix.

"I am going to enjoy raising my miracle baby," Anders said. "I hope this information proves helpful to the herpetological community."