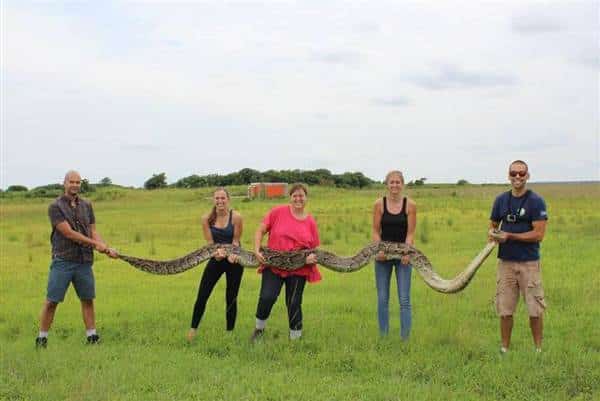 Burmese pythons are an established, invasive species in the Florida Everglades.

An 18-foot-3-inch Burmese python  (Python molurus bivittatus) was captured by National Park Service personnel in Florida’s Everglades National Park earlier this month. The snake was captured in Shark Valley along the tram road, a popular wildlife watching trail that is used by cyclists and trams that take visitors on tours of the Everglades. The snake, a female, was euthanized. It is the second largest Burmese python that has been captured in the Everglades since the reptiles became established more than 20 years ago. The longest python caught in Florida measured 18 feet 8 inches long.

Information on the Burmese Python 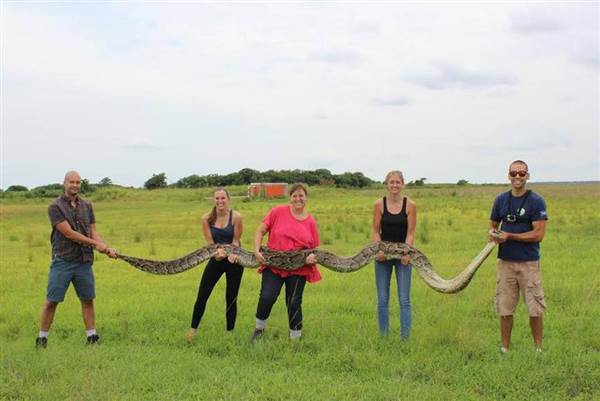 This female is the second largest Burmese python to be captured in the Everglades.

The Florida Fish and Wildlife Conservation Commission announced a second Python Challenge will occur in 2016 in an effort to educate the public about invasive species. Any pythons netted during the hunt will be a bonus.  The commission, armed with new data that provides insight into the movements of the snakes, will help officials better train the hunters on how to locate a python. The FWC will also provide training on how to capture a python once one is located.

Burmese pythons are an invasive species in Florida and are now one of the top predators in the Everglades. The snake is native to Southeast Asia.