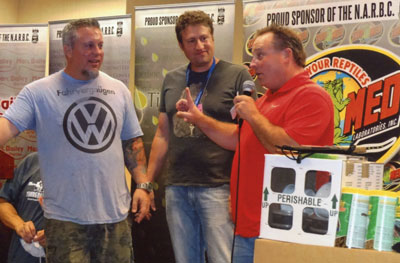 "This year at the fall Tinley Park show we had a record attendance and record size show with a new expanded floor plan," said Bob Ashle y, organizer for the NARBC. "No other reptile show or event in the world has even raised even half of what NARBC did in 2013."

Ashley said that NARBC has been helping to raise money at its Saturday show auctions since the inception of the show in 2001. Ashley announced the person of the year award went to Todd Goodman of Timberline Fish eries. Goodman, Ashley said, has been instrumental to help raise awareness and funds for USARK, PIJAC and other organizations that have been needed by the reptile industry. Goodma n received his $1,000 award at the Fall Tinley Park show, which he proceeded to donate back to USARK.