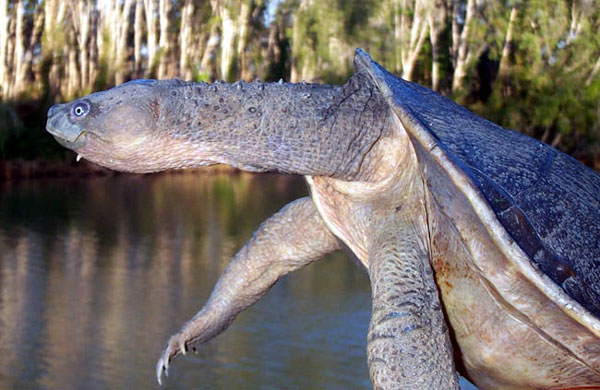 In May and June 2012, the Minister of Environment and Heritage Protection rescued 35 clutches of white-throated snapping turtle eggs from the lower Burnett River and seven Fitzroy River turtle egg clutches in October. The clutches totaled 579 eggs, 520 of which were released over the course of the last two months. In total, 391 white-throated snapping turtles (Elseya albagula) and 129 Fitzroy River turtles (Rheodytes leukops) were released. Dr. Col Limpus, chief of Australia's Aquatic Threatened Species said snapping turtle eggs take about six months to hatch, exposing them to predators in the wild for a longer period of time.

Both species are found only in Queensland, Australia. The white-throated snapping turtle was described in 2006 and was previously thought to be the more common northern snapping turtle (Elseya dentata). It is different from  Elseya dentata in that it has an irregular white or cream colored marking on the throat and lower sides of the face. It has a carapace length of up to 16.5 inches (420mm).  It feeds mainly on aquatic plants as well as fallen fruit such as figs and the occasional aquatic insects, snails, and small cane toads. The Elseya albagula is unique in that it can stay under water for up to three hours and can absorb oxygen via its cloacal brusae. Aussies call them "bum breathers" because of this characteristic.

The Fitzroy River turtle was described in 1980 and is the only surviving member of the genus Rheodytes. It can be found in southeastern Queensland, Australia. It has a carapace length of up to about 10 inches, and can be found in the Fitzroy River and its drainage systems. It feeds on terrestrial and aquatic insects as well as crustaceans, algae, aquatic snails, worms, sponges and macroinvertebrates. It is listed as a vulnerable species by Australia's Environment Protection and Biodiversity Conservation Act and is also on the IUCN Red List as a vulnerable species.