Conservationists in the Philippines rescued 3,831 Palawan forest turtles (Siebenrockiella leytensis), 160 Asian leaf turtles (Cyclemys dentata) and 25 Southeast Asian box turtles (Cuora amboinensis) from a syndicate that authorities say had intended to ship the animals to China for food. The turtles were discovered in a dry concrete pond in a warehouse on Palawan a month ago. The owner of the warehouse has not been found. 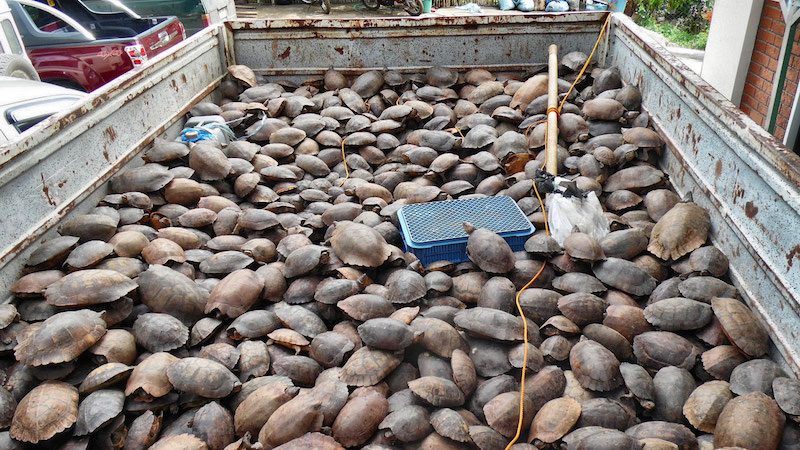 These Palawan forest turtles were destined for the illegal food trade in China.

The turtles, 90 of which were found dead, were living in “deplorable conditions,” apparently without food or water for four to six months with some surviving turtles afflicted with eye ulcers, severe dehydration and other maladies, according to the Turtle Survival Alliance. The TSA sent veterinarians to help nurse the surviving turtles back to health.

“This number equalled the estimated remaining population of Palawan forest turtle in the wild, hence bringing the species to the brink of extinction,” Sabine Schoppe, director of the Philippine Freshwater Turtle Conservation Programme said in a statement to the media.

Approximately 233 turtles are being treated while the rest have been released back into the wild on Palawan. The Katala Foundation in Palawan and the Turtle Survival Alliance are also looking for veterinarians with turtle experience. Contact Andrew Walde at the Turtle Conservancy, awalde@turtlesurvival.org

The Palawan forest turtle can only be found on Palawan island in the Philippines. It lives in creeks and small rivers with full forest canopies and feeds and mates at night. It is a critically endangered species.

The Asian leaf turtle is native to Southeast Asia and has a wider range than that of the Palawan forest turtle. It is an omnivore and is known to squirt the contents of its digestive system when threatened. It attains a shell length of about 6 to 9 inches and is common in the pet trade.