The Memphis Zoo has announced that after 222 days of incubation, a baby Komodo dragon (Varanus komodoensis) successfully hatched October 8. The lizard, which could grow to more than nine feet and weigh up to 250 lbs, weighed in at just 99 grams at birth last month. The zoo plans to keep the reptile until it reaches around three to four feet. It will probably be sent to another institution based on Species Survival Plan recommendations administered by the Association of Zoos and Aquariums. 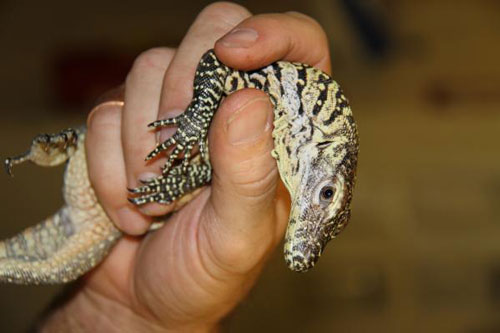 This Komodo dragon hatched at the Memphis Zoo October 8, 2011.

"This was the culmination of over a decade of hard work by the animal staff," Dr. Steve Reichling, Memphis Zoo's curator of reptiles and amphibians said in a prepared statement. "This hatchling is the start of what we expect will be a very successful Komodo dragon breeding program."

The mother of the little lizard laid eight eggs in February, of which only one was fertile. The zookeepers are not sure if one of the two males at the zoo is responsible for the fertilization of the egg or if the female fertilized her own eggs via parthenogenesis, which has been documented several times in captive Komodo dragons. Paternity, as well as the sex of the lizard will be determined via DNA testing by the end of the year.

The Komodo dragon is native to Komodo island and surrounding islands in Indonesia. Considered the largest species of lizard, the Komodo dragon can grow to nine feet in length and weigh up to 250 lbs. It eats meat and can take down pigs and deer, though it dines primarily on dead animals. It is said to have bacteria in its saliva, specifically E. coli, Staphylococcus sp., Providencia sp., Proteus morgani and P. mirabilis. In 2009, researchers with the University of Melbourne published evidence that the Komodo dragon also possessed a venomous bite.