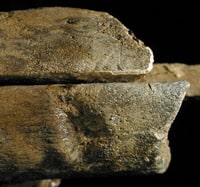 There were many more marine reptiles in the past.

Today, aside from six turtles and some 50 species of sea snake, only the marine iguana of the Galápagos and the occasional crocodile venture into oceans. In the period before the demise of the dinosaurs, around 65 million years ago, a much greater number of reptiles inhabited the marine environment. Piecing together the way that they lived is obviously difficult, but close examination of their fossils can yield valuable clues. 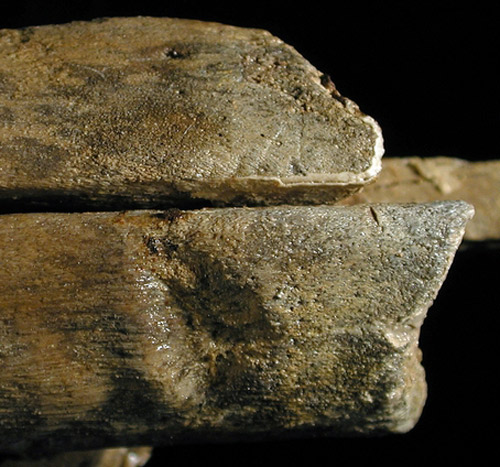 Ichthyosaur bite marks. A close-up of the ichthyosaur snout showing the healed wounds.

A Different World
Scars recently identified on the jaw of a 120 million year old ichthyosaur suggest that life might not have been easy, even for larger species, in the ancient polar oceans. Ichthyosaurs were fast-swimming predators that fed on fish and squid-like animals, and look like dolphins. Adults could grow to nearly 20 feet in length and had long-snouted heads with more than 100 pointed, crocodile-like teeth in their jaws.

The fossilized skeleton in this case was unearthed in the remote desert near the town of Marree in northern South Australia, reflecting just how the landscape has changed since the ichthyosaur was alive.

At that stage, the Australian continent was still joined to Antarctica and would have been much further south than it is today, close to the southern polar circle. What is now arid grassland was then the bottom of a vast inland sea that experienced freezing water temperatures and seasonal icebergs.

Recovery
The surprising discovery of well-preserved bite marks on the bones of the ichthyosaur's lower jaw were made during painstaking cleaning and reassembly of its skeleton in the laboratory. Evidence of advanced healing indicates that the animal survived the attack and lived on for some time afterwards.

“Pathological traces on ancient fossilized bones and teeth give unique insights into the lives and social behaviors of extinct animals” said Benjamin Kear, one of the authors of the study and an Assistant Professor with the Palaeobiology Programme at Uppsala University in Sweden. “Such finds have also rarely been reported in ichthyosaurs before.”

The size and spacing of the teeth marks do match any known potential predators or prey. Rather, they are most consistent with an injury caused by another adult ichthyosaur, suggesting that the wounds were inflicted during combat over food, mates or territory.

Such injuries give important clues about the social behavior of these ancient reptiles. Facial biting is also a common social interaction still very apparent in reptiles today, often being directed towards restraining an opponent’s jaws.