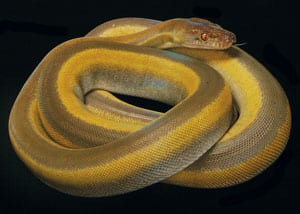 “Part of an exclusive set of morphs Prehistoric Pets produced in 2006, this snake is the first captive-born titanium reticulated python. It is just two generations away from the first wild-caught titanium retic from Indonesia. The Indonesian male was bred to a female tiger reticulated python, which produced tiger heterozygous titaniums. These were later bred together to produce this snake. Prehistoric Pets hopes to produce this phase in albino soon.”