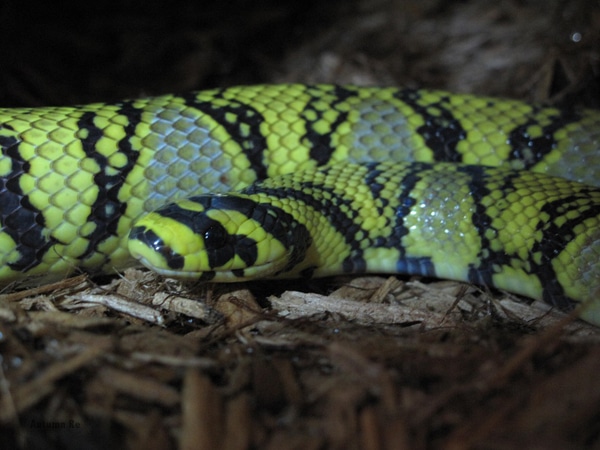 Mandarin Rat Snake (Elaphe mandarina) Despite lacking most of the genetic mutations that make other snakes popular, mandarin rats possess a strikin

Despite lacking most of the genetic mutations that make other snakes popular, mandarin rats possess a striking natural beauty causing many to consider them ‘the holy grail of rat snakes. Their bright colors and diamond pattern may look dangerous, but they’re nonvenomous and actually very secretive, active only around dawn or dusk in heavily-covered areas. They come from rocky forests and farmlands within China, Taiwan, Burma, and Vietnam where the climate is fairly cool and humid. Such conditions are different than what the average snake owner is used to providing and so the poorly understood mandarin rat snake developed a reputation for being difficult to keep.

Nowadays it’s understood that so long as certain snake supplies are met with reptile health & wellness in mind, mandarins can make attractive and rewarding captives for the experienced keeper.

Mandarin rat snakes are uncommon and not usually carried by pet stores, but can be found online through breeders’ websites and classifieds. Wild snakes are regularly imported, but they tend to be stressed from the capture, be more finicky in their eating habits, and have parasites. The successful captive breeding of these snakes is becoming much more common and captive bred individuals are usually available every year in the fall.

The young hatch out at just over half a foot in length, and then average around four feet as adults. They should stay evenly slender throughout their lives.

Keepers were mostly working with unstable, wild caught animals of an indeterminate age until recently and that made figuring out their natural lifespan difficult. Successful breeders have learned much since then, and 10 to 15 years of age appears typical.

Mandarin rat snakes can be kept in tubs or glass reptile terrariums, but screen cages with excessive ventilation may dry out too fast and should be avoided. Floor space is more important to these snakes than height. Hatchlings should be kept in smaller tubs to help them get established and they should be upgraded as needed. Placing them in too large an enclosure too soon may result in them feeling lost. A 30 gallon tank or a 41 quart tub is large enough for an adult. 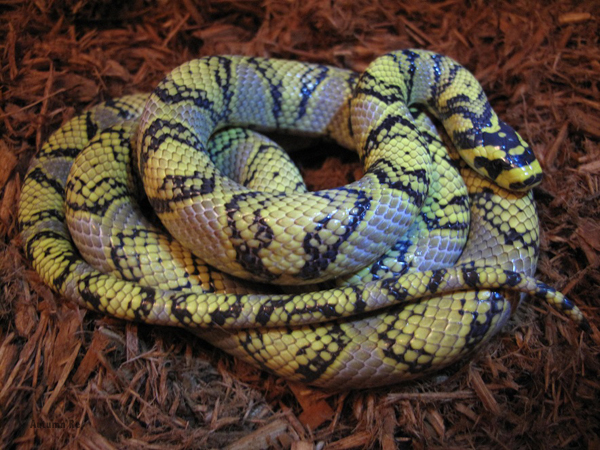 Although paper cage liners can be used as a cheap, no-mess substrate, they won’t allow your mandarin rat snake to burrow as it would like. They spend most of their time buried, so a loose particle bedding such as wood shavings will make your snake happiest. Stay away from oily, odorous woods such as cedar or pine. I personally prefer cypress mulch such as Zoo Med Forest Cypress Mulch reptile bedding for this species since it is less dusty than aspen and less likely to develop mold when exposed to humidity.

Be sure to provide enough cover so that your snake doesn’t feel vulnerable venturing out above the substrate. Snake habitat products like snug hide boxes like the Zilla Habba Hut and tubes are always appreciated.

Mandarin rat snakes remain hidden most of the day and do not require any specialized lighting.

They like it cooler than most colubrids and although a gradient of 60 to 80 degrees Fahrenheit is acceptable, steady temperatures in the mid-70s are ideal. Normal room temperature often suits them just fine. They can tolerate cold much better than heat, and care should be taken that their enclosures never get more than 85 degrees Fahrenheit.

Fresh, clean water should be provided at all times. I’ve never seen my mandarins soak inside their water dishes, but they will often bury themselves underneath them, so a water dish sturdy enough not to be knocked over is a must.

Humidity should be moderate. Respiratory problems or blisters may develop in your snake if the substrate is always kept wet. Simply providing a humid hide box filled with moist sphagnum moss at all times is enough for these snakes. This can be measure with a humidity gauge such as the Zoo Med Dual Analog Thermometer and Humidity Gauge.

If you believe that your enclosure is drying out too quickly, keep in mind that a solid-topped cage with ventilation on the sides, such as a tub, won’t dry out as fast as an open-topped screen cage. This is especially helpful when working with hatchlings since they shed more often and are more sensitive to drying out. No matter the placement, always be sure to have adequate ventilation to prevent stagnant air and mold.

Your mandarin rat snake should eat nothing but clean feeder mice, which can be bought at most pet stores and also reptile shops online. Once a week is a good feeding schedule. Due to living in cooler temperatures, they have a slower metabolism rate than most snakes and have difficulty digesting larger meals. Multiple, smaller prey items are less likely to be regurgitated than a single, large one so it’s best not to offer any prey bigger than the widest part of their body. 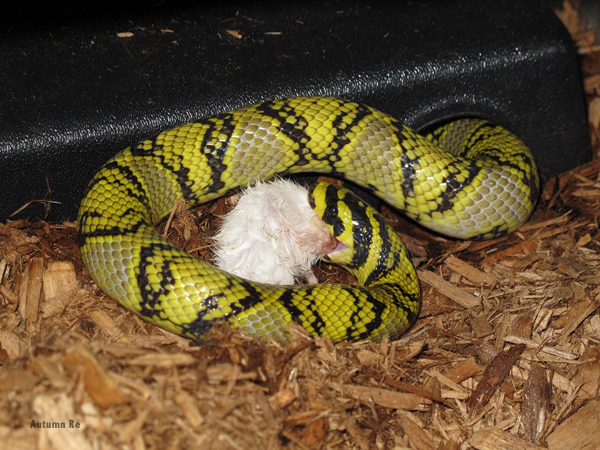 Your mandarin rat snake should eat nothing but clean feeder mice, which can be bought at most pet stores and also online.

This also coincides with their natural behavior of digging up rodents’ nests in order to eat all the tiny young. You can use those instincts to your advantage when dealing with a finicky mandarin by simply placing two small prey items in a dish buried flush with the substrate and then covering it all with a paper towel. Your snake will discover the hidden prey later that evening and believe it found a nest.

Hatchling mandarins can sometimes be hesitant to eat before their first cooling period and many keepers will put stubborn babies through brumation as quickly as possible to trigger the feeding response that comes after. It also helps to keep them in a smaller tub at first to make it easier for them to find the food and also to make them feel more secure.

Despite their beauty, mandarin rats are reclusive and don’t make good display animals. They usually hide all day and become active in the evening, but are shy even then and dislike being caught in the open. They will typically flee, but can also musk and strike with tiny teeth if they feel threatened enough. Hatchlings are especially nervous and more prone to such behavior, but usually calm down over time. They can also rattle their tail when agitated or excited. 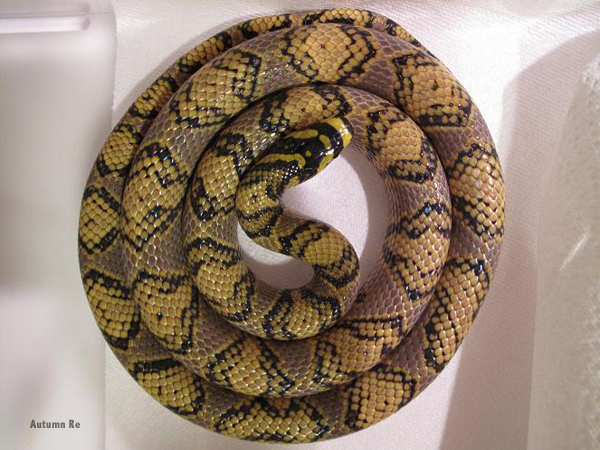 Despite their beauty, mandarin rats are reclusive and don’t make good display animals.

To avoid stress, handling should be limited and their cage is best placed in a low-traffic area. Don’t handle it while it’s in shed or right after it has eaten. When you do hold your mandarin, simply allow it to move through your fingers without squeezing or pinching it. They aren’t the best climbers and will simply slither off an edge if you let them, so keep replacing your hands underneath them as they go.

So long as you recognize their need for gentle care and respect, your mandarin rat snake should thrive and charm you along the way!

Snake breeder Autumn Re has always had a passion for reptiles, especially North American colubrids, and volunteers heavily in public education programs for their welfare.